Sundance London: In A World Review 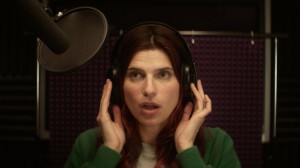 Long time children’s hospital actress, and frequent ‘that girl’ actress Lake Bell tries her hand at directing with In a World, with mostly pleasing results.

The title, a riff on a famous trailer voiceover opening line popularised by real life industry veteran Don LaFontaine, explains the basis of this conventional rom-com (loosely) about the workings of the voicework industry. After LaFontaine’s passing (he actually did die in 2008,) there is a gap in the market for that new booming, marketable voice. The film sees three characters competing for a gig that will get to use the titular line in a new trailer, a real honour and a gateway to industry leadership it seems. Two are the big-lunged meatheads that might be assumed appropriate for this line of work, and the other is Lake Bell, doing it for the girls.

Conventional to the extreme, In a World follows just about every plot path expected of a film of its sort, including in turn a couple of romantic subplots; one blossoming, one fragile, then broken, then miraculously repaired; an uncomfortable one night stand complete with audience-knows-more-than-the-characters tomfoolery; and an exultant final scene where certain truths are realised, character shortcomings resolved and many happy tears shed. None of this really matters though, as it moves along smoothly enough, and more importantly, it is funny.

Writer/Director Bell has put together a snappy script that makes little gnaws at Hollywood, but never reveals any sharper teeth. Perhaps it shouldn’t, assuming this movie is Bell’s proof of product for a future directorial work. As well as industry nibbles, she also runs a gently-feminism line, the central story being of her overcoming these chauvinist competitors, one who happens to be her father.

Bell also makes a jab at the recent teen lit phenomenon, the voiceover in competition is for a a teen book-to-movie franchise that is a parody of the Susanne Collins / Stephanie Meyer type teen entertainment that if really created, would probably make quite a lot of money. Her ultimate success over her male competitors comes not because she’s become the best in the game, but because a female voice is the girl-baiting marketing fit needed to get little bums on seats. As valid as it is, this is the kind of only funny when its topical joke that will date the film fairly fast,

Mostly though, its just a sweet romantic comedy, playing up the cutesy flirtations between Lake Bell the struggling vocal coach / trailer girl,and her recording studio friend Demetri Martin. As a lead, she is likeable, delivering the kind of quirk that might be found on Zooey Deschanel’s show New Girl, only without the irritation. That is a comparison that would probably not go down well as Bell makes mockery of the smoothie-drinking ‘sexy-baby’ voiced rah-girls of this world Deschanel may well be the poster girl for, ending the film with her character coaching them all to “talk like real women.”

The films biggest strength though is its supporting cast. Fred Melamed, as her father, is perfect as someone struggling to prioritise what is important in his life, coming finally to realise of course, that being beaten by a girl who also happens to be his daughter, is actually alright. Martin too, as a fairly established standup, has no problem selling a line, and their screentime together is probably the most purely enjoyable moments in the film.  Adding further semi-star power, there is also Nick Offerman, who perhaps needed a larger part, as he works wonders with everything he is given, overshadowing his on-screen wife, Michaela Watkins, There is even a small role for another stand up, Tig Notaro.

In a World is all very harmless, but its continually funny, fast-firing and seemingly cut of any material that didn’t land. With a lesser cast around her, it might not have worked at all, but with the talent involved, its more than watchable. Lake Bell’s debut is unlikely to induce any great passion, or stick around in memory, but it demonstrates she is a more than capable writer, director and lead, and is worthy of a bigger opportunity of some kind, perhaps a HBO project ala Lena Dunham’s Girls, if Judd Apatow happens to get around to catching it.