Stranger by the Lake DVD Review 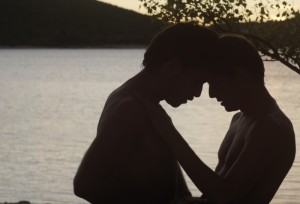 With gay cinema now firmly part of zeitgeist thanks to the success of films such as Eyes Wide Open (2009), Weekend (2011), Free Fall (2013) and Tom at the Farm (2013) it now becomes a different proposition entirely to expand the genre. Alain Guiraudie takes on this challenge by making a film ostensibly about a gay cruising site but adding his own dark twist and distinctive direction. Guiraudie chooses to analyse a small gay male community who choose to gather on the banks of a lake in France. Water on one side and a wood on the other, it seems as though they are a community in hiding. Sheltered from the rest of the world they expose themselves, literally and metaphorically, but one of their number uses the secluded vista for altogether more sinister purposes.

Franck (Pierre Deladonchamps) is a regular to the beach by the lake. He uses it as a spot to cruise for sex but also, more recently, to chat to Henri (Patrick d’Assumcao), a comely man who comes to the lake for peace, not cruising. The two’s relationship is frank, a simple honesty between the two that unveils much. Guiraudie uses an astonishingly personal technique of filming these conversations en face, capturing both men during the exchange which means body language and tone become increasingly observable, allowing a closer analysis of the characters. This delicate technique is 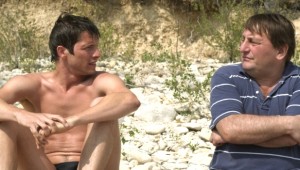 occasionally shattered by rather rough shots of sex in the wood but it is effective in its intent to reveal more about Franck and his aquaintances than would otherwise be possible.

Once Franck becomes smitten with Michel (Christophe Paou) the story takes a forceful turn. He professes that he loves him, though they barely know one another, and this love is tested as Franck watches Michel drown one of his lovers. The drowning scene is constructed in such a way as to retain the subtlety and tranquillity of the film but bestows upon the audience a newly ominous tone. The lake that once 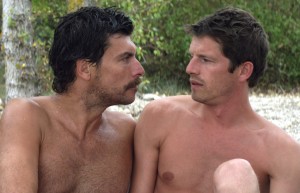 served as a place of exercise and relaxation becomes a more deathly setting.

Subsequently, Franck’s dealings with Michel are fraught with nerves, though the two make love and spend much time together; it is hard to forget Michel’s sin. As the film draws on, this subtly disturbing tone is somewhat shattered by a rather absurd detective and brazen attempt to jar the film out of its disquieting nature. This in the end halts Stranger by the Lake from reaching its potential, quashing its chance of being a stand out film of the genre.