Stranger By The Lake Review 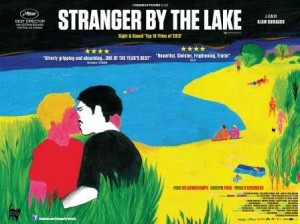 The titular lake is a place where gay men swim or sunbathe in the nude, using the surrounding forest for casual sex. It is separated entirely from conventional society and we learn precious little of the characters’ lives beyond. Franck (blankly played by Pierre Deladonchamps) witnesses a murder from a secluded vantage point. He knows the killer is Michel (Christophe Paou), a man he is attracted to and with whom he goes on to become romantically entangled.

Guiraudie uses long takes throughout to give the sense that the viewer is encroaching on these conversations, the sense of being a hidden voyeur becoming increasingly unsettling as the film progresses. It seems as though the feeling of being watched obsesses all of the men at the lake, and usually with very good reason. Although the relationships formed are based on the premise of being casual, many of the cruisers are possessive and self-conscious. This is one of numerous paradoxes at the heart of Stranger By The Lake, all of which explore the relationship between body and mind. Nudity and sexuality are openly displayed, providing a convenient mask for what is very consciously hidden beneath the surface.

Franck’s unlikely friend, Henri (Patrick d’Assumçao), proves an interesting enigma. Henri’s reasons for coming to the lake every day are unclear, but his conversations with Franck are meanderingly brilliant and sweeter than any between each of the film’s couples. The generic elements arrive in the shape of the bizarre detective who appears to always materialise from nowhere. Guiraudie only flirts with the thriller conventions though and sticks to his lackadaisical style of storytelling, and this is a great virtue of Stranger By The Lake.

This is an example of film using its resources perfectly, fully exploiting its sole locations and never being constrained by a lack of finances. It is also a standout example of a filmmaker eschewing the use of a musical score or soundtrack, Guiraudie creating a fantastically eerie feel without it. Ultimately, this is a fantastically well-directed film and one deserving of a sizeable audience.