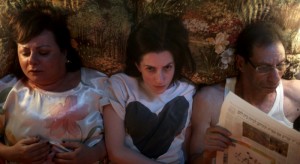 Ester Amrami’s Anywhere Else is a somewhat misjudged representation of a woman trying to figure out where she belongs in life; somewhere between Lena Dunham’s character in Girls and Lisa Simpson, Noa (Neta Riskin) left everything behind to pursue her own decisions and her own life. She moved to Germany to study, to fall in love and to start again but something continues to call her back to her homeland in Israel and the family she left behind. The crisis of young people is somewhat current in both cinema and on television and when done well, it can illuminate a whole generation on what to do and think and act. But unfortunately Anywhere Else is anything but that.

Noa lives her handsome German boyfriend, Jörg (Golo Euler) – as a good Jewish girl this is both an insecurity and slightly uncomfortable wedge in their relationship. Whilst she tries to integrate him into her family life by getting him to say hello to her mother on Skype, he doesn’t really react and would rather be left in the dark. It is somewhat unclear what one is really getting from the other except for the casual smile and sidewards glance; they seem to argue and disagree quite a lot and yet at the end of it all, they love each other? Noa has just been rejected for a grant to study words in different languages that cannot be translated; a deep enough metaphor for the film and one that reoccurs throughout. Every so ofter, the words and people that Noa has been studying play to the film’s audience and whilst at first their explanations are quite timely and work to illustrate her current state, they quickly grow more obtuse and one really has to squint to see the connection.

When Jörg leaves for a trip, Noa decides it would be the right time to visit her family in Israel. She doesn’t tell anyone, she just turns up. Perhaps this is her running away from her work and the ideas of rejection? Whilst at first everything seems wonderful between mother, Rachel (Hana Laszlo) and daughter, they quickly grow fraught and tense. They drive each other mad, not like a normal mother/child relationship but like a Jewish mother/child relationship – the biggest issues with this representation is that it isn’t funny (as per many filmic versions of this), it isn’t a big enough cause of drama to keep an audience compelled and Noa as a character is pretty easy to dislike – she doesn’t give anyone around her chance and yet expects both the characters of the film and the audience to feel sympathetic towards her.

The story quickly develops, which keeps the pacing up and therefore keeps the audience’s attention – Noa’s grandmother 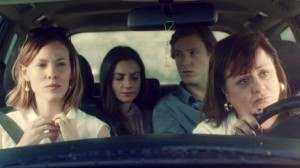 becomes ill and this stops her return to Germany. Rachel becomes distraught and soon grows more distant from her daughter, but things are potentially able to take a more comedic spin when Jörg turns up in Israel… They don’t. He becomes engulfed by the wave of family tantrums and dramas, never quite sure where to stand in them and quite often ends up in the middle of them. He spends time with Noa’s brother, Dudi (Kosta Kaplan) and in one especially touching sequence, the men find themselves connecting on a level outside of the rest of the world when Dudi tries to run away from his army duties and Jörg spends the evening calming him down.

Whilst the intentions are clear and very well put across, the execution just isn’t as fulfilling for the audience. Whilst the story tries to make several interesting points; both about politics, culture and the clashing of different worlds, the fact that the central character is so uncomfortable and rather unlikable doesn’t allow the audience to forge an in to their world. It does give hope that Amrami’s next feature will have potential, she just needs the right tools to begin with.