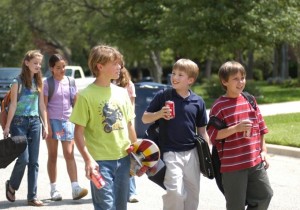 Boyhood is director’s Richard Linklater (School of Rock, Dazed and Confused and the Before Trilogy) latest film. Filmed over the course of 12 years, with the same cast, Boyhood is a film unlike any other. Boyhood required not only an extremely talented and willing cast, but a vision for the story and its characters that is astounding and immeasurable. Boyhood follows the life of Mason, from ages 5 to 18, taking us on a journey which will be eerily familiar to anyone born in the early 90s. Expertly played by Ellar Coltrane, Mason is the most fully formed and developed character I think I have ever seen in a film.

Readily dismissed as a gimmick, Linklater decision to shoot over 12 consecutive summers seemed destined to fall into the “Interesting but ultimately a one time watch” category. In reality though, this unorthodox filming method has resulted in a masterpiece. Far from being a gimmick, it achieves a familiarity and reality that would have been completely lost had Mason been played by a series of different actors. In fact, the whole cast, Samantha (Lorelei Linklater), their mum (Patricia Arquette) and their estranged father (Ethan Hawke) are developed perfectly. As Mason grows from a small child to a tall man with dubious facial hair, his family grows with him. Patricia Arquette beautifully plays his mother, as she copes with a string of bad relationships and a desire for self-improvement. Ethan Hawke shines as the deadbeat dad who sorts his priorities out, trading in his GTO for a people carrier. Linklater’s real life kin, Lorelei Linklater plays Samantha, Mason’s rather brattish but very funny older sister.

The nature of the film provides the audience with a wonderful nostalgia trip as well, as we see Mason grow from Oregon Trail to Halo, and 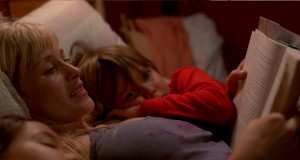 Samantha drive him crazy with Britney’s hit Oops I did it again. An important chat between father and son about whether they will ever make a new Star Wars film, poor Mason, if only you knew. Boyhood has a strange feeling of familiarity whilst simultaneously feeling like a film like no other. It later dawned on me this was due to shades of my own family evident in the characters. Something everyone I spoke to at the screening had felt. Thats the true beauty of Boyhood, it is a film that will effect everyone. If you’ve ever been someones son, father, mother, brother, sister, daughter, stepfather… the list goes on.

I don’t want to talk about the plot as I feel it is one of those films where the journey must be experienced. During the screening as I watched the film and saw everyone else in the auditorium laughing or gasping or just smiling like fools, it reminded me how much of an event cinema can be. In recent times, with the proliferation of content and technologies to view that content, film can easily becomes fodder. For the first time in an incredibly long time, what I was seeing unfold on the big screen, a film like no other, felt like a truly shared experience. The film really takes you on a roller coaster of emotions and revives a boyish spirit inside you. Whilst before the film the 166 min runtime seemed intimidating, it flew by, and I to echo some of Patricia Arquette’s final words “I just thought there’d be more you know?” 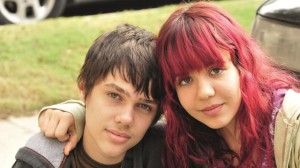 Whilst others will say this film isn’t perfect, on first viewing I find hard to fault it. Some of the acting at times may have seemed little ropey, but Linklaters expert dialogue elevates it into something real, like he has done so many times in the past. Filmed beautifully, lovingly created and acted, Boyhood is a masterpiece and personally Linklater’s finest film yet. It has rocketed straight in to my favourite films of all time, I can’t recommend it enough.