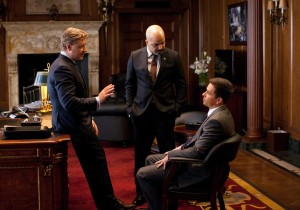 Though it feels like a messily produced adaptation of a mediocre novel, Broken City is the product of an original screenplay by feature scriptwriting debutant Brian Tucker; it is also the first solo directorial effort by Allen Hughes, whose previous credits as director (1993’s Menace II Society, 1995’s Dead Presidents and so on)  have all included twin brother Albert. Serviceable to a point, the film falls short of being up to much precisely because it hints at a lean, mean thriller within but, either due to confidence issues or editorial problems, leaves its more original threads untapped and spends too much time gloating over Mark Wahlberg‘s vacant reaction shots.

Wahlberg is Billy Taggart, a failing private eye in New York City who, seven years earlier, was ditched from the NYPD following an unlawful killing. Due to ongoing financial worries and a rocky relationship to girlfriend-from-the-block Natalie (Natalie Martinez), Taggart jumps at the chance to work once again for dodgy incumbent Mayor Nicholas Hostetler (Russell Crowe), a week before election day. Tasked with finding out who Hostetler’s wife Cathleen (Catherine Zeta-Jones) is having an affair with, Taggart unravels a series of events that involve murder, double-crossing, real estate and suppressed (because obviously scandalous) homosexuality.

There’s plenty going on here. Themes of social decay seem to go hand in hand with New York City, as do notions of a morally compromised economic rehabilitation. Here, the big wigs line their own pockets by signing away land at the geographical expense of those already-displaced neighbourhoods presently living there. Furthermore, corruption pervades New York’s Finest top-to-toe, from its hands-in-pies Commissioner down to unpretentious street-beater Taggart, whose forced departure from the profession was a rot-stopping backroom affair. Of conceptual interest especially, in fact, is that Taggart is from the off a reluctant and perhaps dislikeable protagonist, whose alcoholism (or something resembling it) as well as a confused devotion to actress girlfriend Natalie resulted in a misjudged, murderous vendetta (Taggart readily confesses to being both dumb and Catholic).

But as a cop for whom New York is both a shithole and a wonderful town, Taggart surely has a wider network of influences, even if he remains unconscious of them, such as systemic pressures upon policing itself – including the social, the economic, the political. Why precisely was he trigger-happy? Just what, exactly, could be the root causes of his perpetual moping? Beyond more superficial reasoning, such as a troubled relationship – which falls irreparable victim, midway through the narrative, to a laughably horrid premiere of the sexed-up indie film in which Natalie has scored her screen debut – we have very little to go off.

Asking us to identify with this worn-out cop is perfectly legitimate, of course, and could even be a profitable way of condeming a thoroughly despicable system, but Tucker’s script indulges in one convenience too many: to begin with, it is revealed that the victim of Taggart’s shooting seven years ago was a known rapist; Taggart’s belated moral dilemma has less to do with the fact that he killed a man than it has with him not having served prison-time for it. And that epiphany is helped, no doubt (following a soothing, off-screen bath), by the inexplicably doting loyalty of business assistant and no doubt future girlfriend Katy (Alona Tal). Subtextually gay or otherwise, all these men seem to need is a submissive wife; Natalie is dumped the moment she tells Taggart that the afterparty of her premiere “is my night”, while Cathleen Hostetler’s crime is not adultery, but political uncompromisism (but, spoilers, she was having an affair all along anyway!).

Supporting already-mentioned talents are Kyle Chandler, Jeffrey Wright and Barry Pepper; of the entire cast, only Pepper seems keen to inject something beyond autopilot – and he’s the film’s worst casting choice. Otherwise, all Broken City‘s notable cast list does is draw attention to how little effort each performer puts in. Crowe, who on more minimal days has more presence than most, comes complete with false tan, wig and a dialect coach, while Wahlberg – who, unlike Crowe, is better when made to look busy – struggles to look interested. (One montage sequence, jump-cuts and all, in which Taggart falls gloriously off the sobriety wagon and staggers the streets of New York, is unintentionally hilarious.) Over-busy and consequently only half-baked, then, Tucker’s and Hughes’ first collaboration churns ideas but does not burn with conviction. Released in the first week of that humble window following Oscars season, however, it is perhaps undeserving of a complete butchery – the presumably hefty payouts to its handsome cast notwithstanding.