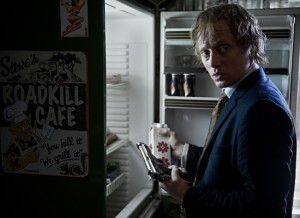 As an adaptation of a novel by Jo Nesbø, the kind of bestselling author whose page-turners are advertised on train station platforms, Headhunters (Hodejegerne) fulfils comparisons to the filmed versions of Stieg Larsson’s Millenium Trilogy, with its Scandinavian brand of Hollywood-friendly action thriller, digestibly clean presentation of “adult themes” and an impossibly neat resolution whose symmetries are a given. Unlike the Dragon Tattoo films, though, this crucially knows its limits, and doesn’t take itself half as seriously.

At the corporate end of present-day Norway, recruitment specialist Roger Brown (Askel Hennie) over-provides for his wife Diana (Synnøve Macody Lund) by stealing art rarities from acquaintances’ homes, fearing that if he doesn’t sustain the high precedents he’s set, she’ll stop overlooking his short size and realise she’s out of his league. A routine theft turns into a nightmare when Roger discovers strong evidence that suggests Diana is having an affair with the apartment’s owner. The latter, Clas Greve (Nikolaj Coster-Waldau), is a former tracking specialist who begins to chase Roger down. On the run, Roger is also wanted by the police for a murder he hasn’t committed…

Channelling Verhoeven’s flashier graces and a Hitchcockian man-on-the-run Maguffin, the film notches up its thrills with some terrific timing and tonal shifts, not to mention intertextual nods to the likes of Duel, The Terminator and North by Northwest. Hennie is well-cast as a cocky corporate prick who, over the course of the film, wins our cheers through sheer endurance – there’s something inherently charming about some average joe running a gauntlet of obstacles, and here they’re aplenty.

This apparently routine affair becomes a macabre comedy in which our protagonist is first humbled when he descends into the shit-heap beneath an outside loo in order to save his life. Finding time for such moments allows director Morten Tyldum to crank up tension while also providing laughs; Roger ascends from the bog like Willard does from the steaming water in the climax of Apocalypse Now, priming his own journey into a heart of darkness covered literally in faeces.

By way of characterisation, Roger’s pretensions are the result of his small-man syndrome. As he explains in his expository voice-over, his short height requires compensation, and he wears the rewards of his profession(s) with an outward confidence that veils his secret insecurities. Providing snippets of wisdom to would-be recruits, he tells us that the only thing by which we are able to value life’s fruits are their reputation.

This points succinctly to the kind of superficialities on which corporations and their individuals rest, and Roger’s own shortcomings have less to do with size than his aspirations to a projected ideal. The subtext by which his real arc develops makes gunplay analogous to libido, and after he brings himself to shoot a female assailant with a suggestively placed (cocked?) pistol, he brings it upon himself to tell Diana the real reasons he has deferred having children. It’s another well-judged moment in a film of many.