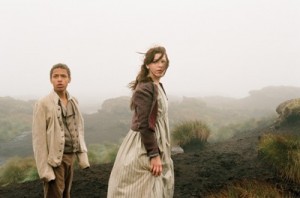 Similar to Honour of the Knights (Quixotic), Albert Serra’s stripped, sparse 2006 adaptation of Don Quixote, Andrea Arnold’s third feature film brings to Emily Brontë’s Wuthering Heights a rough’n’ready handheld agitato that aspires to the elemental. Like Serra, whose film utilised Catalan dialogue and unknown performers to challenge built-in expectations of adapting the literary canon, Arnold opts – with co-scribe Olivia Hetreed – for a reading of Brontë’s classic that emphasises the visceral, interpreting Heathcliff as a black boy embodied by two actors whose trim CVs make his own racial otherness especially resonant.

In early 1800s Yorkshire, young orphan Heathcliff (Solomon Grave) is brought from Liverpool to an isolated farm on the Moors. The subject of prejudices from the outset, Heathcliff endures verbal and often physical abuse from the farm owner’s son, Hindley, with whose younger sister Cathy (Shannon Beer) he develops a clear but unspoken mutual attraction. Wordless to a fault, the reciprocal calm both lend to one another flows into a testing, teasing edge that borders on the masochistic.

Circumstances preclude consummation, and as adults, Cathy (Kaya Scodelario) and Heathcliff (James Howson) are anguished by memories of a shared childhood whose love never blossomed. Aided by Robbie Ryan’s fine cinematography, Wuthering Heights’ momentary flashes of brilliance also carry a beauty, as when its two young creatures intermittently escape the confines of farm life and enjoy loaded silences high up on the windswept hills.

Arnold resists pathos by having her cast perform with a gestural minimalism. To the narrative’s inevitability, she bravely adds the strains of its characters’ internalised desire, with brief cut-aways to nature – to blossom in spring, to an autumnal tree branch blowing against a window – adding an obvious kind of symbolism that also suggests underlying brutality. The natural order of things denies romance.

Like the director’s previous work Fish Tank (2009), though, this is a rather grim, humourless affair. Its general misery overrides the particularity of Heathcliff and Cathy’s heartbreak. Divided into two halves of an hour each, the film seems too long by three reels, and doesn’t quite sustain its early intensity. Though Scodelario’s performance as the older Cathy is remarkably succinct, Howson is burdened with the task of adding nuance to Heathcliff, now a self-made man, even as the film’s stretched duration and his one-note torment risks turning us off.

Apparently coherent and meaningful in her chosen aesthetic, Arnold betrays her possibly hipster approach at the film’s close, as festival-friendly pop act Mumford & Sons swell on the soundtrack, breaking the established diegesis and thereby undercutting the direction’s raw simplicity. It doesn’t quite work, bringing as it does unhappy memories of Nas at the end of Fish Tank, and it seems to reignite the suspicion that Arnold’s grim’n’gritty palette is as limited as we first thought after all. For a moment, there, Wuthering Heights seemed to suggest otherwise.

Wuthering Heights was released on DVD March 26. To read Edwin Davies’ review of the film upon its November 2011 theatrical release, click here.