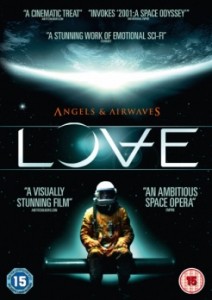 Love is the directorial feature debut of cinematographer William Eubank, who made the film to coincide with an album release of alt-rock band Angels & Airwaves, who produced and scored the film. Following its premiere at the Santa Barbara Film Festival in February 2011 and a small UK theatrical release in September last year, the film is now released on Blu-ray and DVD by High Fliers Films.

Like its title, Love is bland or thought-provoking depending on personal taste. It opens during the US Civil War, over images of which a voice pines, in southern twang, “They say when you hear the sound of devils, all else is quiet.” Shortly after, questions are posed: “Why do we struggle? To breath a more righteous breath?” The juxtaposition between handsomely framed and overly aestheticised wartime slaughter with self-humbled rumination recalls Terrence Malick’s The Thin Red Line (1999), and sets the tone for a poetry-courting, navel-gazing philosophising that may very well be icky. As if to confirm this searching quest for meaning, the prologue concludes with a reference to “something bigger than ourselves”.

Cut to 2039, in which astronaut Lee Miller (Gunner Wright) is fulfilling a mission on the International Space Station around the Earth’s orbit. In regular contact with Houston, he also receives a pre-recorded audio-visual message from his brother, who relates the good news that he is now an uncle. Soon after, however, all such contact inexplicably ceases. Stranded, Miller must draw upon reserves of physical fitness and mental patience in order to see the hours by; through the one small window at the end of his quarters, he can see the Earth, whose visual proximity appears unbearably close.

The conceptual challenge facing the filmmakers here is apparent: how to sustain narrative and even aesthetic interest with such a spatially limited setting and a tight production budget? To Eubank’s credit, this physically compact production belies the fact that its set was built in the driveway of a suburban home, a do-it-yourself constraint reminiscent of John Carpenter’s debut Dark Star (1974). Less easy, however, is the film’s rendering of its protagonist’s sudden and heightened solitude: though Eubank does well to frame Wright in long-shots within such a tight space, the soundtrack betrays the intentions behind its production: whereas (more) silence might have provided a figurative space in which Wright could act, Angels & Airwaves’ music, pleasant enough in itself, reigns supreme.

This is, after all, an 80-minute music promo, and should perhaps be approached as such. Tellingly, according to whomever completed his Wikipedia entry, Eubank subscribes to Stanley Kubrick’s famous notion that a film ought to be more like music than fiction. (“It should be a progression of moods and feelings. The theme… the meaning, all that comes later,” so Kubrick said.) And from its century-hopping cut from the Civil War to the near future and beyond, Love is indebted, of course, to Kubrick’s own 2001: A Space Odyssey (1968), while its space-station abandonment and perpetual ponderment recall Solaris (both versions) and the more recent Moon (2009). In fact, before the inevitable jump-cuts and in-camera speed ramping take hold of its increasingly familiar narrative, the film most resembles Steven Soderbergh’s 2002 adaptation of Stanislaw Lem’s 1961 novel Solaris, with its soothing electronic music textures and remembered-or-imagined cut-aways to Life Back Home On Planet Earth.

There’s a fine line between paying homage to traditions and being derivative of them, however, and Love‘s final-act explosion into some kind of fourth-dimension seems a push too far. Intended perhaps to spark Wider Questions about The Human Condition, this extended sequence draws unfavourable parallels to previous and better films. As a labour of love for those involved, however, Love‘s belaboured thrusts are easier to like than other wannabe thought-showers; a lengthy list of acknowledgements during the end-credits, which concludes with thanks to all those who have risked and given their lives to space exploration, is indicative of its music-album designs and origins. And if Angels & Airwaves are your thing, then all of this is academic.

‘Love’ is available on Blu-ray and DVD from Monday, 18 February.