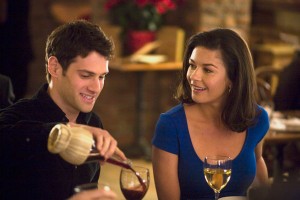 After divorcing her cheating husband, 40 year old Sandy (Zeta-Jones) uproots and takes her two young children to live in New York. Meanwhile 25 year old New Yorker Aram (Bartha) doesn’t know what to do with his life after also just getting divorced (from a beautiful French girl whom he later discovered was just using him to get a green card). Aram works in the coffee shop below Sandy’s new apartment, and when Sandy asks him to baby-sit one night he develops a fondness for the job and is soon employed as their full time nanny. The two soon fall for each other, although their friends are convinced it will never work.

Whilst it starts out with some cringe worthy comedy (including a scene containing actual literal toilet humour), The Rebound settles down to become a surprisingly humorous, enjoyable and entertaining watch. Justin Bartha (The Hangover) is given some great comedic scenes and delivers them well, particularly with Aram’s hilarious comebacks at his strict Jewish parents and at Sandy’s friends who tease him about the age gap. Zeta-Jones character starts out quite weakly with conflicting motivations, but where the film really comes together is the believable chemistry with the scenes between the two of them and it becomes clear this is not just a rebound relationship for either of them. 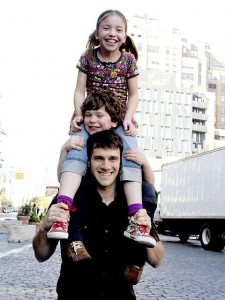 The film also provides some cute comedy moments from Sandy’s young children.Her son Frank (Andrew Cherry) is hilariously inquisitive whilst daughter Sadie (Kelly Gould), loves to dissect animals; with writer/director Bart Freundlich clearly drawing from real parental experiences. Aram’s strict Jewish parents again add another comic dimension, and the eagle eyed will spot that his father Harry is played by musician Art Gartfunkel. Whilst the plot does take a formulaic route through the romantic ups and downs it doesn’t wander into fairytale scenarios as some rom-coms do, and thus provides a much more convincing story with some great supporting characters to provide comic relief.

With scenes that will make everybody laugh out loud, The Rebound is not just for the usual romantic comedy crowd, and is a surprisingly entertaining film from what looks to be a standard formulaic Hollywood set piece. A perfect gentle summer watch for those who aren’t in the mood for the complexity of Inception, or the explosions of The A-Team.