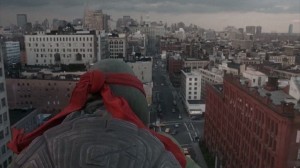 Following a computer-animated dud in 2007, and ahead of next year’s scheduled reboot (produced by Michael Bay and starring Megan Fox and William Fichtner), Mediumrare Entertainment are releasing the original 1990s live-action Teenage Mutant Ninja Turtles trilogy in a three-disc DVD set, and for the first time ever on Blu-ray. Released on 28 October, the set includes a making-of feature, stills galleries and trailers, as well as English subs and crisp transfers – which emphasise the comic-book feel of the movies’ cinematography.

Originating as a self-published comic strip parody by Kevin Eastman and Peter Laird, Teenage Mutant Ninja Turtles played a large role in the multimedia merchandise boom of the late 1980s and early 1990s, expanding into a cartoon television series, the action figure industry, video games and other marketing tie-ins such as skateboards, candy and stationary. Identifiable catch-phrases and recognisable gimmicks made the Turtles – a quartet of mutated reptiles living in the sewers under New York City with their sensei master, a rat named Splinter – one of the hottest brands of their age. That they began life as a simple amalgamation of other influences – Marvel’s Daredevil and Frank Miller’s Ronin among them – speaks volumes about the pop culture of the era, and about the commercial viability of comics in general. It wasn’t long before Hollywood got involved.

Though the three original Turtles films (1990-93) grew in budget, they diminished in respectability. By the time the third instalment, Turtles in Time (1993), was released, the darker impulses of the 1990 film had given way to such an all-out kiddies chic that sharper instincts were all but lacking. While characteristic of the fundamental silliness of the comic strip and animated series, TMNT III is deficient in storytelling and, at points, borders on casually racist. Sending its heroes to early 17th Century Japan via a timewarp, the film sets up multiple plot threads – across dual timeframes – that never quite hang together. The feudal setting and the welcome return of Elias Koteas as hockey vigilante Casey Jones from the first film ought to have injected energy; instead, the whole thing feels like a top-to-bottom marketing appeal to infants – an outwardly harmless succession of one-liners (“cowabunga!” “bodacious!”) that could and perhaps would have been better off left to a thirty-minute cartoon. Such weaknesses weren’t helped by the fact that Jim Henson’s Creature Shop was not involved in the animatronic protagonists – as it had been for the previous two films.

But things were already heading this way. Teenage Mutant Ninja Turtles II: The Secret of the Ooze (1991) was a palpably more diluted film than the 1990 original, with a city-wide love of pizza replacing the earlier work’s emphasis on crime. Though Casey Jones would return for the third outing, his absence here is filled by a much younger (and more obnoxious) character named Keno (Ernie Reyes Jr.), while David Warner plays a British bowtie-wearing scientist straight out of a how-to-draw-caricatures textbook. While Shelly Johnson‘s cinematography captures the contrasting colours of the film’s sets in absorbing fashion, and while the climactic nightclub setpiece unfolds to a stage performance from Vanilla Ice, the 1991 sequel might best be summarised by that sequence in which the Turtles’ chief nemesis Shredder learns that his mutant henchman – Rahzar and Tokka – are stupid, embarrassing creatures.

Nonetheless, the first Teenage Mutant Ninja Turtles (1990) remains something of an anomaly when in comes to movie outings for Eastman and Laird’s comic-book creations. A product of the same city in which Ghostbusters II (1989) was set, the film riffs from its outset off the crime and fear that were defining life in New York City, with a pervasive and hyperbolic media in an ongoing tussle with a failing police force. An urban metropolis in peril, with its marginalised and/or fatherless youths brainwashed into a false sense of revolutionary purpose by a masked figure named Shredder… If essentially harmless, the first film has an undeniably darker edge as a result of its social topicality, and the rebellious cameraderie of the heroes in half-shells alleviates the grit (the film’s tagline was “Hey dude, this is NO cartoon”). Daft? Maybe, but it’s precisely the same premise for which The Dark Knight Rises was praised last year. As “Head Thug”, look out for a 21-year-old Sam Rockwell.

The ‘Teenage Mutant Ninja Turtles’ Movie Collection is released on DVD and Blu-ray by Mediumrare Entertainment on 28 October.