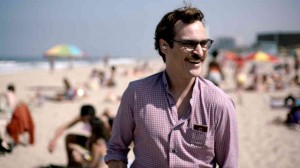 Spike Jonze’s Her is one of the most touching tales of love in an age controlled by technology; whilst the premise appears futuristic, what is most interesting about the film is that it all seems strangely familiar and present. Joaquin Phoenix gives a heartfelt performance as Theodore, a lonely letter writer, who is in the middle of a divorce from his wife, Catherine (Rooney Mara). When he isn’t at work, he is playing video games or learning about the most up to date software for his computer. That is until he decides to purchase the latest operating system, advertised as the first with artificial intelligence. On purchasing the system, he is given the option of a man’s voice or a woman’s – enter Scarlett Johansson as Samantha, who over time lets Theodore grow close to him as he finally believes that he has found a cure for his loneliness.

As Samantha talks more with Theodore, she learns about him and what she can do to help but gradually it appears she starts to get something from the relationship as well and Jonze’s intelligently introduces questions, which blur the boundaries between reality and computer. Theodore starts to go out, get hobbies and chat with friends because his confidence has grown as his relationship gets stronger. But what he doesn’t count on, and what Samantha can’t teach him about is his inner conflict and frustration at dating something metaphysical. When Samantha admits that she is currently talking with 1000’s of other people at the same time, and she provides what each and every one needs, Theodore starts to grow anxious and worried about what the next step in his life is going to be.

One of the strongest and most provocative things about Her is the verisimilitude that Jonze has created; his colour palette is filled with striking and yet neutral 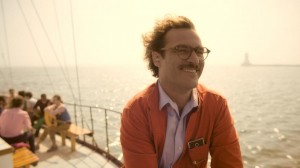 colours. The world looks similar to our own and yet has a sheen about it, an acceptance of technology that we aren’t quite at yet in our own reality. Theodore’s world is filled with screens and earpieces, smooth surfaces and buttons (sounding similar to our own?) and he moves freely and safely through it, really allowing the audience to explore with the characters. Furthermore, Jonze has most succinctly produced a film, which questions our own relationship with technology – whilst the film is set in a future, it seems like an immediate one that isn’t too far off. He questions what happens when computer systems become more powerful and intelligent than those who created them, but also what happens when we become to reliant upon them. This is most brilliantly illustrated when Theodore can’t get through to Samantha and he suddenly becomes worried that his computer system has failed and he has lost her forever – he runs from work, trying to get home and continues to try and contact her throughout the chase. This sequence has taken the traditional love story chase through the streets, but it cleverly is only between one person – running to get to his computer! When he finally gets through, she tells him that she had gone for an upgrade but Phoenix performs the scene with such intense emotion that the audience can really see how involved he has become in the relationship.

Furthermore, the film also offers a dialogue on sex in the digital age. Near the start of the film, Theodore is seen using sex chat lines and sites – most interestingly, it seems like a throwback to sex lines when people chatted to each other and got off on voices (different to the world of Grindr and Tinder now). Following this, Jonze magnificently has sex scenes between Theodore and Samantha, where it is simply by each others voices that they seemingly get off – Jonze has therefore removed the physical aspect in something, which is very intimate and sensual. By having the sex lines at the start, it illustrates attitudes to sex in the first instance, so it means that when it comes to have sex with the operating system, this isn’t too farfetched. 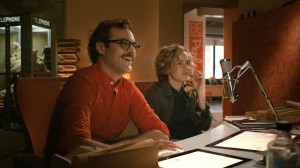 Performance wise, both Phoenix and Johansson are just wonderful to watch and listen to. Johansson in particular does a fascinating job because obviously she only has her voice to convey emotion – much like something on the radio. But she carries it off so well, really making the audience believe in her character and sympathise with her. But it is interesting to note that if the actress chosen had been a newcomer or lesser known, would it have had the same effect, as it is easy to picture Johansson in the role. Regardless, both have wonderful chemistry with each other and at certain points, really do interact like a real couple – in particular during the conversation when Theodore tells Samantha he is meeting his soon to be ex, Catherine. She sounds so hurt and worried.

Other performances include Amy Adams as Theodore’s friend, Amy, who also starts a friendship with her OS once her husband leaves her. Throughout the whole film, it teases a romantic relationship between Amy and Theodore, but it has to take something intense to bring them together, like the loss of their OS relationships.

Whilst the film does suffer from a slightly long length, and loses its way towards the last quarter, it is still a fascinating study of love and computers. Spike Jonze has done a beautiful job creating both a commentary on technology but also one of the most interesting and provocative love stories to have been released in ages. Her is a touching and intelligent film, which really shows off the talent of those involved.