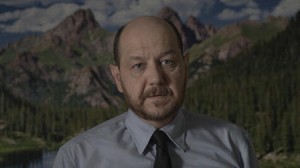 If there is one film this year, which is more than a mind boggling mind fuck, it’s Miss Violence. Alexandros Avranas’ intense and unrelenting drama is a chilling portrait of a family in trouble, shrouded in secrets and misery and gasping for air as each member tries to find a way out. Avranas captures the audience from the very first moment of the film with the stark juxtaposition between the name of the film and the opening scene – a seemingly happy celebration of an 11 year old’s birthday.

Angeliki (Chloe Bolota) is celebrating like any other girl with her family; the music is playing, there are smilies and most importantly is the fact that the family have come together to celebrate the occasion but already there is an undercurrent of darkness in the bland colouring of the flat and the reaction from Eleni’s (the brilliant Eleni Roussinou) mother when she tells her that she is pregnant. Slowly the camera leaves the apartment through the balcony window and Angeliki looks face on to the audience, straight into their eyes before giving a cheeky grin and throwing herself from the balcony to her death below.

Here begins this barmy Greek drama, which looks closely at the family Angeliki leaves behind. Whilst one would 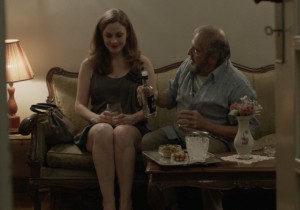 expect the family to be in tears for weeks to come, the father (the frightening Themis Panou) ensures that the mourning doesn’t last too long and the family return to some form of normality. It quickly becomes apparent that he is part of something dark but it takes a while before the revelation arrives. As the film goes on, the family is brought into question by the authorities about why this girl jumped to her death but they are so good at keeping the act together that no one can tell what is going on.

Soon the lives of each of the characters starts to unravel as the father’s true intentions are revealed; his foul treatment of his family, the abuse he subjects and the reign of terror he has over them. Whilst the build up is slow, Avranas takes the time to show snapshots of the days as they slip by for the family and even leaves the audience questioning the relationships between the different members. Who is the father of the children and which are the grandchildren? It certainly becomes clearer by the end, but it only adds to the incredible tension throughout.

Avranas’ filmmaking is one of two things that makes Miss Violence one of the most memorable and compelling pieces of cinema this year, the other is the incredible acting, especially from both Roussinou and Panou. There are three scenes in particular, which highlight both the technical and emotional skill of Avranas, which also refer to the recurring themes of the film itself. At one point a neighbour comes to visit Eleni with condolences over the death of the child, when she leaves after their conversation is interrupted by her mother watching a wildlife documentary on the television, Eleni locks herself in the bathroom and cries whilst the monkey noises from the room next door echo throughout her head. The camera looks right on, into Eleni’s face with no intention of offering help or condolence but rather like voyeur, steadily watching but not acting. The noises of the animals creates an amazing sense of tension and that one day she may just snap. 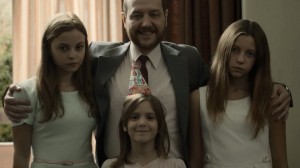 Another scene, which was one of the hardest of the film to watch was when the father allowed the youngest granddaughter, Alkmini (Kalliopi Zontanou) to slap the face of her brother, Philippos (Constantinos Athanasiades) repeatedly after a report comes home of his misbehaviour at school. The camera, again acts like a voyeur, simply circling the two children whilst she hits his face again and again, each slap reverberating through the ears of the audience, becoming more and more uncomfortable and alienating and suggesting the power of violence within the home.

Lastly, the scene when it is all revealed – whilst most of the film takes place behind closed doors, leaving the audience to guess what is happening to the characters, the rape of Myrto (Sissy Toumasi) by a selection of men makes it clear what sort of show the father is running here. The camera stays deadly still this time, reminiscent of the infamous rape scene in Noé’s Irréversible, watching without intention the breaking down of this 14 year old girl. It’s scary and really sums up the emotional experience of watching this film.

Miss Violence is a something few people would expect but by the end, it is really quite realistic that one would walk away disturbed and uncomfortable within their own skin. The ending is perfect; like books ends, it mirrors the calmness of the opening, with an intense sense of serenity, which the family deserves. An incredible feat of a film and deserving of its accolades.