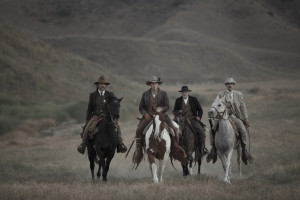 Kurt Russell is double billing at the moment with gender bending Westerns – from Tarantino’s The Hateful Eight to S. Craig Zahler’s Bone Tomahawk and thankfully the latter of these films is a true cinematic experience and a thrilling adventure from start to finish. Russell stars as Sheriff Hunt in Bone Tomahawk, a man who will do anything to ensure the people of his town are safe from harm and so when a group are captured and imprisoned by mysterious cannibalistic cave dwellers, Hunt leads a rescue mission that will ultimately see them face their deadliest opponent ever.

Patrick Wilson, Matthew Fox and Richard Jenkins star alongside Russell as the others who join him to save the lives of those they hold dear. There is really no way of preparing yourself for a film like Bone Tomahawk and ultimately it comes out of a postmodern culture of bending the rules and merging genres so much that it becomes difficult to be able to easily categorise. Zahler does an impeccable job taking elements from a Western, the scares and tension of horror and the emotional turmoil of a good drama and blurs the lines so far that Bone Tomahawk becomes an outstanding collection of all three.

Arthur (a subtle but excellent star turn from Wilson) is bed ridden with a nasty break in his leg and his wife Samantha (Lili Simmons), a doctor’s assistant tends his wounds and forces rest upon him. But when Samantha along with others are abducted by a troglodyte clan who are known to rest in a place called the “Valley of the Starving Men,” Arthur alongside Hunt decide they must travel out and look for the clan to save their people. Chicory (Jenkins), the town’s backup deputy and John Brooder (Fox) make up the team as they volunteer to join.

What initially starts with all the generic conventions of a Western from the location, to the characters, the tonality of their 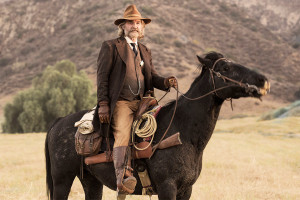 speech and the way in which the story moves, quickly blends with what is expected of a horror. The footsteps in the night, being watched by someone you don’t know is there and the insanely well paced unfolding and building of tension that forces the audience to the edge of their seats. Each character has their own story to tell and as the journey goes on, their paranoia about what they will find starts to engulf each of them until the thrilling and out of this world climax.

Bone Tomahawk also has another talking point, which surely will leave audiences gasping for air throughout – the violence. Zahler does an outstanding job of understanding the demands of the story he is telling and blends together the violence of a Western with its guns and beatings alongside the horror of the cannibalistic brutality. A lot of the violence happens offscreen and in a Funny Games-esque way, it forces the audience to create what is happening in their heads, which is often more terrifying than seeing it on screen. He has an outstanding sound design, which really ramps up the volume on tears and rips (most frequently in flesh), which reverberate with audiences and really get under their skin. There is one scene of absolute extreme violence, which will leave Bone Tomahawk as one of those films that you undoubtedly will never forget – but it’s more fun to discover that on your own.

As a directorial debut, Bone Tomahawk is an outstanding piece of work with a lot of heart and a lot of passion. It’s bloody and filled with gore but it’s also beautiful and fully takes advantage of the outstanding landscapes it finds itself in. Highly recommended for Western and horror fans alike and maybe even those in between.