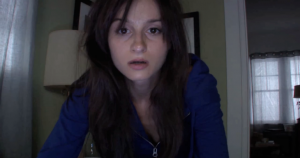 Zachary Donohue’s The Den is a terrifying kind of film, something that slowly but surely creeps under the skin of the audience and then keeps them gripped until the bitter end. It is an urgent and important horror film, which follows on from last years Antisocial, looking at the dangers of the online world that we have become so reliant upon. What makes the film so scary is that it is based within a world completely like our own, the main character is a standard girl with her own thoughts and dreams like anyone of us and she spends her time doing uninteresting stuff on her computer, pretty much like the rest of us.

Melanie Papalia plays Elizabeth, a student who has been given the thumbs up to do a study into social networking and online chat within an environment called The Den (much like our own Chat Roulette). Here Elizabeth can chat with other random people from around the world at any time of the day, get to know them, become friends with them and ultimately lead a whole other life online with those people who think they know her. Every so often she speaks to her boyfriend, her sister and other friends of hers from reality but as the film goes on, her relationship with them changes and it becomes harder for her to maintain her own reality alongside an online one.

One day, Elizabeth comes into contact with a young woman whose camera isn’t working but is instant messaging, her conversation isn’t too interesting but she asks Elizabeth to be her friend and she is intrigued but as time goes on, the camera suddenly turns on and she sees the woman and soon witnesses her murder at the hands of a masked madman. From this point onwards, Elizabeth and her loved ones become pawns in a game as the killer tries to track each one down and taunt Elizabeth with the fact that someone else is going to be murdered. 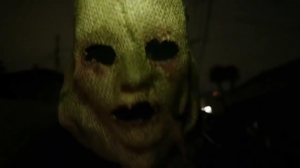 for the film, the environment is something many web users will be aware off and understand how it works. It soon becomes unsettling how dangerous this world and interface can become and takes everything that the audiences knows and turns it on it’s head. One of the darkness and scariest pieces of the film is during one night when the killer takes control of Elizabeth’s camera and simply watches her sleep – she is so engulfed in darkness that the audience are looking around the room waiting for something to jump out but when that doesn’t happen, and it turns everything the audience are expecting on their heads it makes the atmosphere of the film even more tense.

The tension and the high points of the film are the moments when this monster, the horror of the film takes something that we all use in our day to day lives and turns it into an object of terror – just the ability to control her computer whilst being somewhere else is creepy and although it sounds silly, the moment when Elizabeth’s hard drive is wiped and she loses everything is an everyday terror that the audience can sympathise with but within the context of the film, it becomes even more of a scare tactic.

Papalia’s performance is gripping and although she doesn’t quite have the charm of a scream queen, she is quite aware of how to move and be within the boundaries of the premise of the film. Donohue expertly has created a film that fits within the world of the webcam and doesn’t ever feel boring or strained but instead provides an intense feeling of claustrophobia and panic. Highly recommended and deathly dark, The Den is a memorable film that may require you to put the laptop away for a few days.