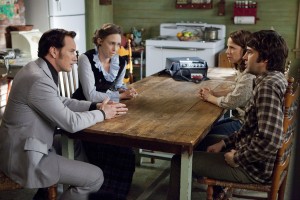 James Wan’s The Conjuring has everything you want from a well made, brilliantly shocking horror film. It successfully and gleefully recalls the ghostly dramas of time gone by and provides little nods to staples from the hugely established oeuvre of the horror genre. What more could you want? It has ghosts, exorcisms, empty dark houses, a barrel full of religious imagery, a demented doll and some seriously good acting. The last point may surprise many people but if you look at it, some of the best horror films have really wonderful acting and the genre has provided us with some of the biggest stars of today. On top of all this, The Conjuring may very well be the most fun you have in the cinema all year.

The Conjuring focuses on Lorraine (a completely powerful Vera Farmiga) and Ed Warren (Patrick Wilson) who are a couple who also happen to be paranormal researchers. They have a deep belief that practically anything can be explained but when a ghostly presence is in fact the case, it appears to affect Lorraine more than she could ever realise, often putting herself and her family in danger. The story is based upon the true story of Warren’s and the cases that they took part within.

They called to inspect the Perron household; Carolyn (Lili Taylor) and Roger (Ron Livingston) have just moved into a beautiful, old house, which is in

urgent need of repair. The couple also bring along with them their set of five daughters, all of whom are expecting something very different from this move. When the family move into the house, strange things start to happen until the escalation of fear becomes too much and the Warren’s are called in to investigate. Initially it is small things, like bumps in the night and things being moved but the suspense of film is such that little actively happens on screen and yet the audience, alongside the character are just waiting for something terrifying to happen. Rather than a large series of jumps (something that Wan did previously in Insidious), The Conjuring is very clever in building up tension; peaks and troughs in the plot to allow a chance for a proper narrative to be developed.

When the Warren’s come in, they learn that the entire house is surrounded by a curse after the people who had previously died in the house. It turns out that the ghostly presence is trying to compromise Carolyn and wants her to kill her children, after a previous tenant of the house did the same thing. But the Warren’s learn, it is going to take more than just their usual set of skills to fight these demons and whilst their work life starts to blur with their own home lives; it could quite possibly be the most challenging and dangerous case of their lives. 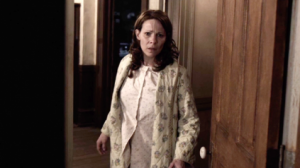 Where The Conjuring really succeeds is the throwback to old school haunted horror cinema, fully admiring the traditional tropes and yet it completely renews the popular sub-genre with it’s clever storyline and willingness to allow direct access into the story for the audience. Whilst many of devices that Wan uses are traditional; long corridors, dark lighting, loud noises, there is never a moment when these feel old fashioned or recycled. Really this is a most interesting of pieces because Wan has created a postmodern recollection of what horror used to be like, setting the film during the 70s, when this sort of cinema was previously at it’s hype. Oddly these stereotypes of horror cinema feel quite the norm because these are the images that today’s audience are used to when seeing old school horror cinema. Rather than thinking this is an old fashioned film, it is rather calling upon a sense of nostalgia for what was past and what is most probably missing in contemporary scary cinema today.

By a slight of hand and a stunning use of the camera, Wan is able in moments to make The Conjuring a rather elevated piece of cinema – something that mixes typical horror tropes (think the humour of Raimi with the shock of Craven, Friedkin and Kubrick) alongside some of the best thrillers ever made (note there are some Hitchcockian techniques used alongside De Palma and Fincher). There is little argument that the cast assembled for The Conjuring is one of the best in recent cinema of this genre, all of whom have great chemistry with one another and bounce (sometimes literally) off each other throughout the film. The partnership between Farmiga and Wilson is golden; they seem like the perfect couple and although we know they have had their issues in the past, they are there to support to each other now. They are both relatable for people in the audience, in their care for each other outside of their profession but also work together to bring the best results. Wilson pulls the quieter, religious conscious out of the bag in this film; whereas in Insidious he was rather more the caring father, in The Conjuring he is not afraid to get his hands dirty and get involved.

Whilst recent horror cinema has had to change drastically with the times, especially in the light of the The Cabin in the Woods last year which 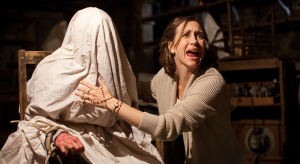 ultimately went out of its way to subvert the genre and point out the traditional flaws, The Conjuring is almost the older grandfather to Cabin in terms of it’s style but rather the hip cousin, as it still remains as relevant, exciting and shocking as anything that came before it. Telling a really exciting story, which will guarantee some jumps throughout, The Conjuring has reminded people about the history of the genre and hopefully sets a new precedence of what we can expect in the future.