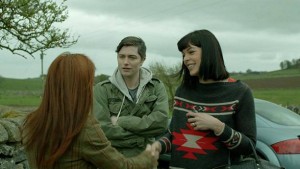 Simeon Halligan’s White Settlers has been hailed the Scottish Independent horror movie and really the timing of this film couldn’t be any better with the referendum coming up next month over whether Scotland will be independent and separate from England. But it remains to be seen whether Halligan’s film purposely had that on the brain or whether it was simply a narrative, which plays out the tension that has followed the English and the Scottish throughout history. As a home invasion movie, it follows swiftly on from last year’s successful You’re Next and whilst it may not have the same visual skill or tension that Adam Wingard’s piece had, it is certainly an entertaining and worthy addition to the subgenre, which is now so often explored on a much grander scale (ie. The Purge) but White Settlers is very aware of what it is and takes advantage of it’s claustrophobic nature and alienating location to the full.

Uprooting from England to Scotland (because the house prices are simply so extravagantly less!), young couple Sarah (newcomer and a star to watch out for, Pollyanna McIntosh) and Ed (Lee Williams) have dreams of coming to the countryside and starting a new life for themselves. They find a property with far more land than they could ever hope to get back at home and at the steal of a price that Sarah keeps commenting on there is very little question of whether they’ll move or not. This is going to be a new project for Ed, he is planning on ripping the place apart and starting again (it certainly looks as if it needs a coat of paint or two) and this is just what he needs to kickstart his new chapter with Sarah. The audience are given little background into the character’s lives before the moment they get out their car in Scotland except that they look happy enough.

The rest of the film takes place over their first night in the house – they have been persuaded by the local agent who tells them that apparently this house sits on a site where the English and the Scottish once fought. When Ed asks who won, the agent replies mysteriously that it depends on who you ask. What follows is the usual montage of laughter and mishaps as they bring some of their belongings into the house. Sarah is adamant that she will help out with the electrics in the house and demonstrates her lack of ability when she blows the fuse in a lamp. None of these sequences are particularly thrilling or new for that matter but there is something about the location itself that just keeps the audience hooked and interested enough to want to know what happens to the pair.

Sarah and Ed themselves are interesting characters and they are delicately and innocently portrayed by McIntosh and Williams – they seem like any couple, which instantly makes them relatable for the audience. Whilst the chemistry 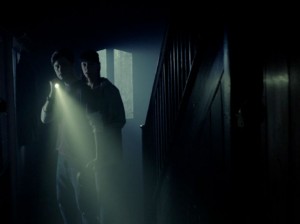 between the pair is questionable, they both give their all in a film where the script isn’t the strongest thing but rather the intrigue and mystery as they step into the night. As expected Halligan is aware of how to make things go bump in the night, ultimately waking the pair up as they go to investigate. To build up the tension, several events happen before a major narrative push forward; Sarah steps downstairs to get her toothbrush from the car in the dead of the night and hears something outside, which turns out to be an animal. Ed inspects the house when they hear creaks downstairs, but he puts it down to the old walls and the open door (although they are both sure they locked it before they went to bed). Of course after a number of these events, the actual attack occurs and a group of people dressed in pig masks do all they can to rip the couple apart.

Sarah quickly escapes and the following sequences highlight the power of McIntosh’s talent; she runs, she screams and she fights back but always keeping the audience convinced that the adrenaline pumping through her is causing her to react in the same way that any normal person would rather than sort of superhuman powers. The rest of the film plays out as one would except with Sarah looking for Ed (who had been captured at the start of the invasion), a few twists and turns and then ultimately her own capture (just when she is getting away and you think she is going to be found by someone else). But the biggest twist of all is the ending, a sort of prologue if you will, is more of a chance to make the audience smile at the concept of the film itself.

Whilst White Settlers is pretty middle of the road, it is certainly worth a watch to see a home invasion film on a much smaller scale and to highlight the talent from both the leads, but especially McIntosh. Now is the right time to watch the film and if anything, it will certainly make you chuckle for the right reasons.