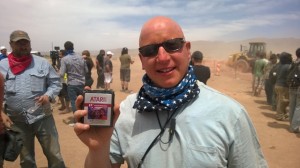 Who better to direct a documentary about the life and sudden death of video game pioneer, Atari, than Zak Penn who has previously worked as writer for X-Men 2, X-Men: The Last Stand, The Incredible Hulk and The Avengers? Obviously clued up on his video game and fantasy knowledge, Atari Game Over seems more like an enthusiastic hobby of Penn’s rather than just another job, which instantly adds massive amount of layers to this interesting, intriguing and very well made documentary. Aided in production by Simon Chinn, who has been recognised for his work on Man on Wire, The Imposter and Searching For Sugar Man, it makes sense that as a team, they have an incredibly tight, well structured film that gets to the heart of the point and forces the audience to become involved whether they had used an Atari as a child or are from a completely new generation all together.

Legends and myths exist around the demise of Atari, namely that their Christmas 1982 seller, E.T, was to blame for their collapse and ultimately their 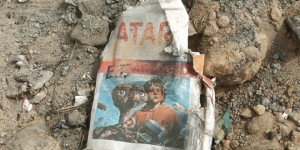 death. As the story is told, thousands of E.T. cartridges were apparently buried in a waste land in Alamogordo, New Mexico. At the time it was covered in the papers but no one ever really knew what happened in that burial and whether it was simply just E.T. that went underground or whether there was a deeper reason for their end. Atari Game Over is like some of the best recent documentaries, trying to literally unearth the fable and work out what happened all those years ago. Unfolding like a mystery, tense and suspenseful, Penn introduces the audience to Atari and all the major players that made this company become a multi-million dollar machine. The film carefully plays out two stories; that of Atari itself, told though interviews with Howard Scott Warshaw (the designer and producer of many of Atari’s biggest selling games plus E.T.), co-founder, Nolan Bushnell and Manny Gerard from Time Warner who bought Atari in the 1970s alongside fans, commentators and academics in the field. The other story is that of the buried cartridges; Penn and his team work with Joe Lewandowski (a waste disposal expert who has been pouring over documents and maps for years trying to work out where the games were left) to work out whether there is any truth in the myth. Interviews with local government, talking about the process of digging up the waste site and the issues surrounding this project are mostly used as filler but do add somewhat to the question of whether they are even going to be able to dig down, let alone whether they will find anything whatsoever.

With recent documentaries like The Imposter and Finding Vivian Maier, uncovering the mystery as the filmmakers go along, giving the audience the
feeling as if they are actually partaking in the discovery as well (rather than just really great editing), Atari Game Over had a lot of pressure to work in a very similar way. Thankfully Penn and Chinn delicately tell the story with just enough geekery for the fans of the video games themselves to become excited and involved but without going too far down the path of expecting the audience to be well versed in that world and in fact, they open the door for those who have never played an Atari game and welcome them with open arms. 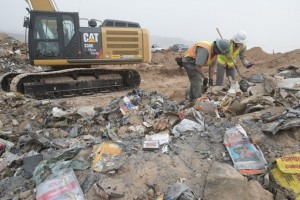 The tale of Atari itself is far more involving and provokes much more opinion and discussion than the ‘discovery’ segments of the film. which aid in getting some form of truth around the myth but are perhaps a little less interesting than the filmmakers would have hoped. It is actually during the interviews with Warshaw, Bushnell and Gerard that the most interesting story starts to come through. A door is opened for those not involved in this world by bringing together brilliant connections; from the video game adaptations of films to explaining who else was involved with Atari that had gone on to change the computer world forever (including Steve Jobs) and to start what is now known as Silicon Valley. The tale of learning about this group of people who were dedicated and passionate about their craft, who had money from Warner coming in but were perhaps not the most conventional group of workers and how their work was internationally recognised is a story that all audiences like to hear; surely it’s the American Dream come true. Then the drama of E.T comes along and Warshaw was given five weeks (rather than six to eight months as per the norm) to design and create the adaptation after Warner laid out a massive sum for the rights from Universal. Having gotten sign off from Spielberg, they needed to release the game before Christmas but after people started to return the game, having sighted it for being boring and too difficult, Atari found itself in free fall. E.T has gone on to be voted one of the worst games of all time but it’s refreshing and illuminating to listen to fans and experts talking about the game and noting that in fact, there are far worse games out there indeed.

Atari Game Over has it’s moments where it can be emotional and touching, it’s exciting and well paced and ultimately uncovers the secrets of the company that have been kept quiet for years. It gives a chance to those involved at the time to voice their own story and keeps the audience intrigued until the last moments.