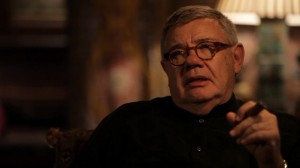 Full of intrigue, diplomacy, international card games and mysterious players, Plot for Peace uncovers the murky world of Cold War era diplomacy in southern Africa and champions a new hero in the fight against apartheid.

The film centres around an extremely well connected international grain trader called Jean-Yves Ollivier who was uniquely placed to use his experience and contacts to find a solution to the deteriorating situation in South Africa and the surrounding region.

Front Row Reviews was lucky enough to meet this venerable political poker player, along with the producer and co-director Mandy Jacobsen, the co-director and editor, Carlos Agullo and the historical consultant, Stephen Smith in the Showroom bar after the film was premiered at Sheffield Doc/Fest.

Born in Algeria and part of the French settler community known as the Pieds-Noirs, Jean-Yves experienced at first-hand what it was like to be ‘pushed into the sea’ by an uprising against colonialist rule.

You grew up in Algeria as part of the French colonial community and was involved in the fight against the independence movement during the revolution there in the ‘60s. What was your role and looking back how has this shaped your outlook to the situation in Algeria and other post-colonial countries?

Jean-Yves: Everyone asks this one (laughs) maybe we need to put something in the film explaining.. Yes I was very young and naïve. I was 17 and [the pro-French fighters] used me to deliver messages from Algiers to France. I was a runner. I was caught with a very important message in Paris and I was arrested and jailed and that was the end of my war.
We lost and one million of my community, all of us apart from two hundred, left our homes and had to go back to France. But we were lucky, we had passports.
Obviously looking back I can see the liberation movement’s point of view. As I said I was young..

So when you came to South Africa in the 1980s as a cereal trader what did you find there? Was there a similar situation?

Jean-Yves: I couldn’t believe what I saw there. The white community were sleep-walking. They did not realise that in a few years’ time they would be chased out, pushed into the sea as we were in Algeria. And as I said we had passports and somewhere to go, they had nowhere to go.

In the film it is obvious you have incredible access to powerful people in the region. How were you that connected as a cereal trader?

Jean-Yves: Cereal, grain, is essential to the survival of a country. The state takes care of the purchase of grain worldwide so very quickly you get access to the people in power. The grain trade is based on trust as very large transactions are made over the phone sometimes. So I had contact with the powerful people and a reputation as someone you could trust. That helps.

The film has also made some incredibly high-level connections and there are an impressive array of voices throughout who give their view on the situation in the 1980s and the mysterious Frenchmen pulling the strings. 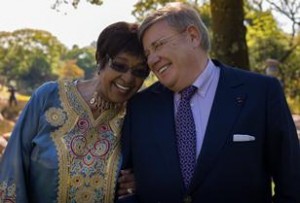 however, seems less familiar with the Frenchman and suggests he was a spy, something he vehemently denies.

Zipping along at the pace of a political thriller, with a rolling dramatic soundtrack driving the action, the film never gets dull despite the vast amount of detail and large cast of characters. Sometimes, however, I did feel like I was straining my forehead closer to the screen in an effort to follow every twist and turn.

This effort feels rewarding once the film has explained the intricate diplomatic situation. Jean-Yves’ masterplan for ensuring the release of Mandela involves a six-nation prisoner exchange between South Africa and the Marxist ‘frontline states’ surrounding it, supported by Cuba. This in turn leads to the Brazzaville Protocol and an unlikely peace in the covert war being fought over Angola and Namibia. The film argues this allowed the tottering apartheid regime to release Mandela.

You organised high-level diplomatic conferences between enemies as well as prisoner exchanges and were involved in making sure they went smoothly. This must have taken up time, effort and money. Was your business affected? Why were you doing these things in the first place?
Jean-Yves: In France we have the expression, ‘When you love you don’t count’.
It was very costly it is true because you are giving your time and my business was suffering slightly because during the peak of activity – the prisoner exchange – I had to stop business. I was compensated $50,000 after the exchange but this nowhere near covered my expenses.
I had the desire to help. I could see what was coming because I had lived through a similar situation. The situation [in South Africa] was very bad but it could have got a lot lot worse. 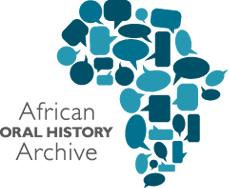 The film goes along at a fast pace and you pack a lot of information in there. Could it have been even more dense or did you include every detail of the story?

Mandy: How much is much more dense? (laughs) It could have been a lot more dense yeah. We were aware we had to reach a global audience and made compromises and sacrificed a lot of material with that in mind.
We also had a very unique narrative development, we had access to the African Oral History Archives and uncovered the story as we went through them. So Jean-Yves landed as the main character when we came across some footage of him at the prisoner exchange. We tracked him down and soon realised the huge role he played.

You seem like a very close team with very specific roles.  How did you decide to share the direction of the film?
Carlos: They came and found me after they had uncovered quite a lot of the story and knew the direction they wanted to go. My background is in fictional, dramatised films so they wanted me to give the film a pace and a narrative smoothness that would tie some of the complicated details together. Also, I was not as attached to the history as Mandy and Stephen [Carlos is Spanish] and could look at the film with an outside view.

Mandy: Stephen [Smith] was the historical consultant and he steered me down the direction of looking at the role the region as a whole played in the fall of apartheid. We’re used to looking at the ANC, sanctions and international pressure but it was interesting to explore whether regional peace was a precondition to the end of apartheid.

Stephen: The way the film was developed was a little chaotic. We would talk to Jean-Yves, then go away, do a little bit more research, and have to meet up with him again to talk about a new discovery. That is why there is so many different settings for his interviews in the film. I like that though. Unintentionally we captured his nature as someone who moves around constantly, going here and there, making deals. That is why we had him sit in a plane for the last set of interviews.

Did you enjoy the film Jean-Yves? Do you think it tells the whole story?

Jean-Yves: Yes, I’m satisfied with the movie. I have not told this story to anyone but they persuaded me. I did it so my nephews can understand what their uncle has done in his life, so I would have preferred it to be a little more like a home video (laughs) but maybe they can come back to it when they’re grown up.

What has your life been like since the fall of apartheid Jean-Yves? Have you used your contacts to help out in other international situations?
Jean-Yves: Some yes, mainly in Africa, but some elsewhere. I am very fond of Lebanon. I have had an apartment there since before I first came to South Africa.
The Syrian situation is a serious problem and it is already involving the whole region. I have my opinions on what should be done there but I’m sorry, at the moment, if I tell them to a journalist, they might not happen. I’m not involved so much… (smiling wryly).
I love that part of the world. Thankfully they [Lebanese] are a little cautious in starting another civil war.

Plot for Peace is a vital historical documentary that has been skilfully developed as an exciting and hugely interesting political thriller. The number of recognisable faces telling the untold story of Jean-Yves’ role gives it credibility and the frank interviews with the charismatic yet humble Frenchman adds a human quality to the tale.

“Africa is a place where one man can make a difference,” says neo-con US foreign policy advisor Michael Ledeen at one point, typically patronisingly. However in this case, it was not one man in the pay of oil companies, or international espionage, or big pharma or greedy western governments. Jean-Yves Ollivier, known as ‘Monsieur Jacques’ in dispatches at the time, loved and cared enough ‘not to count’ and his efforts have finally been documented.

A great historical resource as well as an exciting documentary, Plot for Peace tells a story of a man who embodied trust and helped build it in others.