As part of Empire‘s Big Screen weekend Paramount Pictures gave a showcase of upcoming films, unveiling never before seen clips and a taste of what to expect over the coming months. 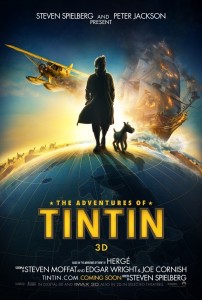 Amongst the movies showcased was the long awaited The Adventures of Tintin. Two clips were introduced by Producer Peter Jackson and Director Steven Spielberg. For both filmmakers this was a passion project, as they had been lifelong fans of the books. Spielberg initially wanted to make a film adaptation after meeting the author Hergé in the 80s, but his biggest problem was trying to animate Snowy, Tintin’s canine best friend. Therefore a long time after, Spielberg approached Jackson at Weta to help him to create Snowy and eventually the two began to work on the project together. The clips shown look brilliant, and the 3D really works well with the CGI created world. The characters have expressive faces and move convincingly which was always a concern when the news came that Tintin was going to be a motion capture film. The Adventures of Tintin will no doubt be one of the biggest blockbuster hits of 2011 and will be released on the 26th of October.

Also shown was a trailer for upcoming demonic possession horror The Devil Inside. It follows a young woman who follows a couple of exorcists in a bid to understand what happened to her possessed mother. This exorcism horror genuinely looks creepy and a far cry from bland Exorcist imitators like The Rite. It will be released 16th March 2012. 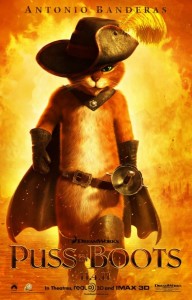 Puss in Boots 3D. The Shrek spin off follows the swashbuckling cat in the events that led upto his first meeting with the green ogre. The opening was very funny and was filled with subtle adult humour which went down extremely well with the audience. The only concern is that the opening isn’t a clear indicator of the quality of the film, as past Shrek films have usually started well and then petered out. Puss in Boots will be released on the 9th December 2011 and stars Antonio Banderas and Zach Galifianakis.

An extended scene from the remake of Footloose was screened which received a mixed reception. It follows Ren (Kenny Womold), who after moving from Boston to the small town of Bomont, challenges the local ban on dancing. The clip shown was a bit corny, as we saw all of the local kids break out into dance when they suspected all the adults were asleep, but people who have seen the final product say the full version is much better. Footloose will be released on the 14th October 2011 and also stars Dennis Quaid.