Blistering Barnacles!: A Look At The Adventures Of Tintin

Later this month Steven Spielberg and Peter Jackson are bringing Tintin to life on the big screen and also this week his animated adventures arrive on Blu Ray for the first time. The boy reporter with the ginger quiff has been a much loved character for the better part of a century and it is about time that he was revisited. He is the hero for all ages as his adventures touch upon a multitude of genres and have such a broad universal appeal it’s easy to see his enduring popularity.

Tintin is easily one of the most popular European comic book characters of the 20th century as his adventures have been published into over 80 different languages and around 350 million books have been sold worldwide. Created by Belgian Georges Remi, who is better know to the world at large as Hergé (from his initials backwards and spelt phonetically in French), as a cartoon character for Le Petit Vintième, which was the children’s section of the conservative, Catholic newspaper Le Vingtième Siècle in Belgium. Tintin was developed from another Hergé character called Totor, who was a boy scout, and he was first published in 1929. Tintin was actually a young reporter for Le Vingtième and his first adventure, Tintin in the Land of the Soviets, saw him and his faithful dog Snowy journeying to Soviet Russia and revealing the immoral behaviour of the Communists.

Continuing with the clumsy propaganda of the first adventure, his second, Tintin in the Congo, was nothing more than a defence of colonialism and big game hunting and had an unfavourable depiction of the native population. It also has some very graphic moments of animal slaughter, for example when Tintin is shooting at an antelope which he believes is amazing as its still alive no matter how many bullets hit it, however he finds out he has been shooting different antelope and has managed to kill the entire herd. To be fair these moments of violence are done for humorous effect, much like the Simpson’s Tom and Jerry parody Itchy and Scratchy. On a side note Hergé admitted he was embarrassed of this story and regretted making it. 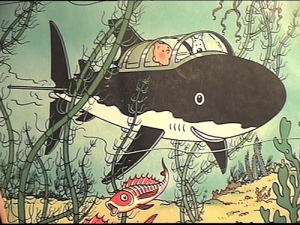 Tintin’s third adventure, Tintin in America, reduced the blatant propaganda and increased the adventure. This became the standard for the rest of the stories and this approach allowed it to be enjoyed by both young and old readers. Most of his adventures concern the boy reporter either trying to do a good deed or investigating some event only to end up entangled in some fantastical adventure. He travels the globe thwarting criminals, hunting treasure and dabbling in espionage (his disguises are ridiculously obvious, but always work). He even goes to the Moon in one adventure. He also meets some memorable characters along the way in the forms of Captain Haddock, who has a love of whisky, the absent-minded and half deaf Professor Calculus and the bumbling detectives Thomson and Thompson.

All these adventures are meticulously presented in Hergé’s trademark style Ligne Claire (Clear line in English). A style that features strong colours and cartoon style characters set against a realistic background. It is this realistic 20th century world, obsessively researched by Hergé, that adds a unique perspective to Tintin. It frames the stories around either specific events, such as the Sino-Japanese war or The Great Depression, or certain political and social fears, Communism, drug smuggling, exploitation and terrorism for example. Grounding it in this way gives it not only a historical feel, but a greater sense of danger.

Tintin himself is a fantastic character and both the book and the 90s animated show capture his endearing adventurous spirit. He can be easily compared to Indiana Jones, but it is the intrepid reporter Lois Lane (of Superman fame) that he shares a lot of his characteristics with. They are both resourceful, inquisitive and have a penchant for adventure. In fact they are made stronger by the people around them, he isn’t above asking for help. Tintin is not a superhero, he is a young man who finds himself in danger and uses his wits and intelligence to get him self out, not to mention his fighting skills and deft aim with a gun. He can be a little naive but on the whole he is a great adventure hero and perhaps a role model for his legion of fans. 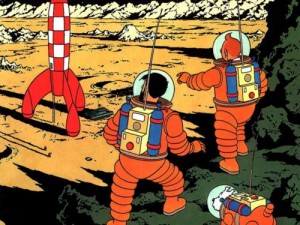 This week sees the re-release of The Adventures of Tintin on DVD and Blu Ray. The series is the most well known adaptation of the comics and is perhaps what most people are familiar with when they think of Tintin (no one can forget that theme tune). It is well represented with the re-release as the picture quality is gorgeous, giving life to Hergé’s imagination and the episode arrangement, in order of comic publication, is a nice touch. The animated series made it’s début in 1991, the series was 3 seasons long and consisted of 39 episodes, which adapted 21 of the 24 adventures Hergé made. Co-produced by Canadian company Nelvana and French animation studio Ellipse, the series faithfully adopted Hergé’s art style and even had Tintin expert Philippe Goddin on board to make sure the show could be as faithful as possible.

Obviously like most adaptations the show changed a lot of the books content so it didn’t offend the countries it was selling itself too. The violence inherent in the comic was toned down drastically with death being removed (although it is still implied in a handful of episodes) and the use of guns cut to a minimum. Captain Haddock’s drunkenness was also another thing that was reduced, but it is still significantly present in The Crab with the Golden Claws. Snowy no longer breaks the fourth wall like in the comic and most of the adventures have been altered slightly. However Tintin in America was significantly changed as the gangsters became the focus of the story and not the stereotyped Native American, the adventure is the better for it being a highlight of the show. Other highlights include The Blue Lotus, Tintin in Tibet and both of the Moon based adventures. Something that wasn’t changed was Hergé’s cameos from the comics, it is reminiscent of Hitchcock as he would merely be in the background. But on the most part the changes never distilled what makes the comics so great in the first place. 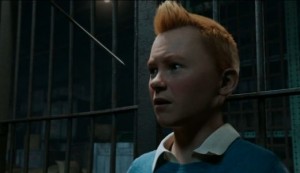 Looking ahead to later this month and Tintin will once again grace the world with his big blockbuster début. With Spielberg behind the directors chair and Jackson on board as producer it’s easy to see that this 3D performance capture adaptation will have loads of action and at least look the part. Most Tintin fans fears should be dispelled as Hergé himself mentioned that he thought Spielberg had the credentials to bring Tintin to screen, according to Tintinologist Michael Farr (yes Tintinology exists). Spielberg himself has always wanted to do a Tintin film, having the rights for the films in the 80s, and was going to meet with Hergé in 1983 but he died a week before. Another reassuring factor for fans is the writing talent on display as Steven Moffat, Edgar Wright and Joe Cornish are all working on the script and between them they have a very strong creative portfolio. The only minor grumble is the fact that the film is based on The Crab with the Golden Claw, The Secret of the Unicorn (the films title) and Red Rackham’s Treasure. It isn’t because these adventures aren’t entertaining but its because they lack the political elements and historical events that strengthen Tintin’s adventures. There is no problem that Spielberg is perhaps treating this as a “Indiana Jones for kids”, but it doesn’t need to be dumbed down as the comics and the animated series are already on par with the content of the Indiana Jones franchise in terms of mature themes. The only real different is the lack of romance in Tintin (and the fact he isn’t a wise cracking archaeologist). However all they really need to do to keep any self respecting Tintin fan happy is have Captain Haddock utter his famous catchphrases, include some silly slapstick in the form of Thomson and Thompson and have Snowy being the most useful dog since Lassie. Also the shark submarine wouldn’t hurt.

But however it turns out Tintin is a character with universal appeal and his adventures will hopefully continue to entertain people, young and old, for another 82 years. With this new film he is thrust once more into adventure and danger and it is nice to see him take centre stage as the worlds greatest boy reporter.