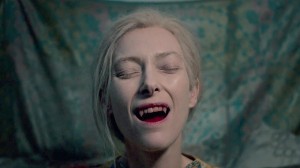 Jim Jarmusch returns after a four year hiatus with a loose, otherworldly tale about characters who have been around even longer than him. The Only Lovers Left Alive are a vampire couple (the exciting pairing of Tilda Swinton and Tom Huddleston) who after hundreds of years of cultural curation see themselves as the last bastions of taste in a world largely without it.

It might be expected that this would reflect a world weary Jim Jarmusch then, but his lovers lament isn’t entirely about him and the other artists looking down. Only Lovers Left Alive is a celebration of sorts – littered with references to cultural institutions, and fostering a strong belief in the restorative power of fine and great things. Like tacked up posters on a teenagers wall,  Jarmusch slightly clumsily amasses a number of talking points through history to convey taste and knowledge but they prove little more than fleeting interests. Buster Keaton, Christopher Marlowe, Mary Shelley, Jack White, even Rodney Dangerfield crop up in Jarmusch’s milieu, but only as tickboxes. Referential cinema always feels a bit empty when its not supported by any greater ideas.

In a way it is inevitable, but it is still disappointing to note that Jim Jarmusch feels more like a reliable director than an exciting independent voice now. When comparing Only Lovers Left Alive to his early films, a transformation would naturally be expected; more polish, more product, less punch and more appeal, but Only Lovers Left Alive feels not so much polished as slightly uninspired. It wouldn’t be fair to say it could have been made by anyone, as it has Jarmusch’s fingerprints all over it, but thats part of the problem. It is Jarmusch by numbers – pop culture references, quirky characters and bleeding-edge cool, all when expected. Some say Jarmusch is stagnating, but his film before this one doesn’t suggest that. Put up against his last film, the bold, elusive and vibrant The Limits of Control, Only Lovers feels a little, well, dusty.

Part of this is due to the genre. Vampire films have cropped up a lot recently, and it is very difficult to imbue the genre with anything particularly original. While Jarmusch makes a noble effort, compare it to Claire Denis’ grisly, lusty vampire film Trouble Every Day for instance though, and this one looks plain toothless. Denis’ film takes the old sex-as-violence trope to erotic, violent extremes. Jarmusch’s film sits in safer territory, taking the other route for a vampiric text and exploring the tropes of undead lore, with Jarmuschian deftness. The consumption of blood is treated as an addiction, with Hiddleston buying it illicitly from hospitals, Swinton savouring and swirling it like a fine wine and Huddleston’s younger sister (Mia Wasikowska) bingeing on it like a heroin addict.

As if to further this, Jarmusch hurls in wordplay aplenty – ‘I might have been born at night, but I wasn’t born last night.’ – none of which is noticeably bad, but rarely funny or original either. The film is a bit try-hard with its literary run ins too. More than a reference point, Christopher Marlowe shows up as an active character, a chum and a blood supplier for Swinton. During their chats, inevitably there is (unfavourable) talk of Shakespeare.

The central metaphor is the best way Jarmusch engages with the vampire material. He draws a divide between the vampires and the humans beyond species – vampires are the underground and humans the mainstream. Humans – represented entirely by Hiddleston’s likable but simple supplier (Anton Yelchin)  – are referred to as the ‘zombies,’ a mass of men. With this we have Jim Jarmusch’s defense of the old cool, the elusive and the inaccessible. It may seem snobbish and irritating, but it comes off more as a tribute to obscurity, to subcultures and tastemakers, Jarmusch thanking those before him who have created and led opinion.

Appealing too is the films pointed dedication to the analogue. As well as some tasty vinyl worship (a pitch perfect scene with Swinton and Hiddleston dancing to old records), Jarmusch shows through his characters, an appreciation for antiquated recording equipment, bound books and old television sets. This fetishistic appreciation of the comforts of the object and the value of craft, when mixed with Jarmusch’s penchant for elaborate productions and layered mise en scene becomes quite a treat.

The film, despite its mostly melancholic mood, ends on a note of quiet contentedness as our vampiric pair find themselves satiated by a new cultural discovery, a mystical beauty singing to an audience of few in a small dive back in Swinton’s hometown. The restorative beauty of art –  in this instance a small pleasure but reason enough to carry on.