On the surface Steven Knight’s Locke seems like a modern thriller in the making, mixed with a unique filmmaking style and lead acting from the wonderful Tom Hardy it seems there is little that could go wrong. Well…

Unfortunately there is such little excitement and suspense in Locke that the whole innovative idea really falls quite flat. Whereas this had the potential to be another Phone Booth or Buried, where there was such a lot at stake, Locke just seems to be a slightly heightened episode of a soap opera. Hardy plays Ivan Locke, a construction worker, who at the end of a busy day has to rush off away from his site in his beautiful 4×4 down to London for some mysterious reason. Everything in Knight’s direction alludes to a high octane chase ahead; the darkness of the location, the tension, the soundtrack and the silences but yet when the reason Ivan has to rush off is revealed, it all seems slightly obvious and over the top.

In terms of the filmmaking itself, Knight has done himself proud – the idea of 90 minutes alone with Tom Hardy in the drivers seat of a car whilst traveling down a motorway is intriguing in itself, but the fact that he has created an atmosphere that is so tense and interesting really highlights Knight’s own potential as director. He places the camera in a variety of positions, as the audience is both inside the car with Ivan and outside looking in – the POV changes at various times, depending on how Knight wants the audience to feel. He also has a clever technique of reflecting things inside the car from vans and the like that are rushing past; often communicating either how the audience should feel or how the character is feeling. For the cineasts amongst us, watch Locke for it’s interesting techniques.

Tom Hardy also does a fine job as Ivan, minus the slightly off putting and confusing Welsh accent. Yet he manages to command the emotions of the audience 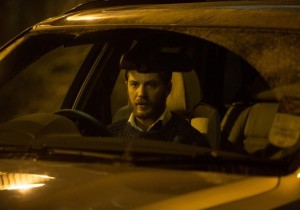 completely for the entire film. There is never a moment when one is bored of watching Hardy on screen, which simply cements the accolade, which calls him one of the best actors of his generation. From the emotional revelations to his beloved wife, to his touching conversations with his kids, the anger he feels towards his departed father and the accomplishment he feels when talking about his building site, there is never a moment when the audience is unaware about how he is feeling. If Locke were on stage, Hardy’s performance would also be brilliant.

But unfortunately in the case of Locke, good filmmaking and acting almost seem secondary to the story, which lacks the substance and potential the film needed to tie together. Ivan has been harbouring a secret that a year ago, he slept with a woman once when he was aware for work. Since then they haven’t seen each other, but she has admitted she is pregnant and this is the evening that she is due to be giving birth in London. So this is what the rush is for; he has to leave work to get the birth of his unborn child. He has to admit to his wife (with whom he has two children) that he cheated on her and he has to organise the workers and the logistics for a momentous occasion at work the next day.

Of course as guessed, his boss isn’t happy and he is fired over the phone but this doesn’t stop him from sorting out what needs to be done. Furthermore, his wife cannot accept his apologies and tells him not to come back…

Talk about a tough car journey. 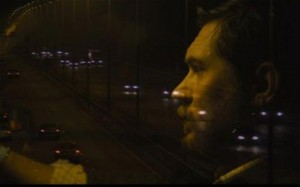 Yes, Locke is subtle and the nature of the issues in his life are what keeps it realistic and to a greater extent, allows the audience to be sympathetic as these are not out of the world circumstances. Yet the set up of the film itself is raring for something so much greater than this story, which is what unfortunately warrants itself useless and mundane.

As a narrative experiment, Locke is a great one – clocking in at 90 minutes, it’s a great film to look at visually – the flashing lights of the surrounding cars and the sepia tones of Ivan’s world allow the audience a gateway into his head, what he is seeing and feeling. But whilst Knight’s filmmaking is gripping and unique, certainly something to keep an eye on in the future, Locke renders itself as a lesser film than it’s predecessors who have tried similar techniques. It’s an interesting one to watch, but is frankly quite forgettable and doesn’t require repeat viewing in the slightest.