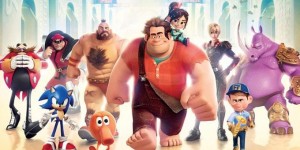 Recently Disney returned to one of the traits, which made them one of the most powerful animation companies in history; the Disney princess. Recent films such as Tangled and Brave, reminded people about the innovation, intellect and humour of Disney whilst the Disney Pixar films grow from strength the strength (we don’t talk about Cars) and with the impending Monsters University, everyone is right on the ball for Disney in 2013 but to start off the year, they are releasing Wreck It Ralph, which although is not a Pixar film, feels awfully like one. Not since Toy Story have I been so enthralled by a Disney picture (despite massively enjoying Tangled and Brave) like I found with Wreck It Ralph. Nominated for Best Animated Feature at the Golden Globes (and missing out to Brave) and nominated at the impending Academy Awards, Wreck It Ralph features the correct doses of drama and comedy, which I feel I have missed from recent Disney pictures. As well as all this, there is a wonderful lesson to be learnt at the end and throw in a dose of nostalgia, and you have this simply brilliant picture.

Taking just a brief moment to look at the short, which plays before Wreck It Ralph (a la Pixar), Paperman, a 2D black and white animated short blending traditional animation with computer generated animation. Paperman follows a young businessman on a train platform who finds his papers get caught up in the wind. Whilst he is collecting them all, one of the sheets has hit a pretty young woman in the face, who gives his back the paper with a lipstick kiss on; with that she disappears. The man gets to work, sees the girl and decides to use his office work as paper airplanes to get her attention. When this doesn’t work, the planes come to life and bring them back together on the platform from the morning; they kiss and it ends. This animation is a joy to watch from start to finish, and really does bring some emotion back to animation, which I truly feel has left in recent years. It proves that you do not need fancy 3D technology to entertain an audience, and instead a simple storyline, with a light hearted ending is successful. The short, as with most Disney, does make some interesting comments about a workers life; shoved in an office, ten in a row working away on paperwork makes one feel the short is making some sort of political standpoint, but it is subtle and just noticeable. Whilst this short does adhere to a heterosexual mainstream point of view, I feel it won’t be too long till we see something similar between two men or two women in mainstream cinema.

Getting back to Wreck It Ralph. The film tells the story of the titular arcade game villain, Ralph (played by John C. Reilly) who 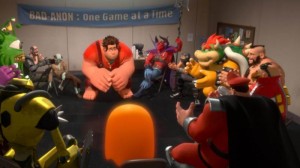 decides that he wants to play against his role and dreams of becoming a hero, because he doesn’t understand why the other characters in his game dislike him so much. When he decides to prove that he can be a hero he travels between games in the arcade so that he can gain a medal, bring it back and prove he can do good. Whilst on his travels, he finds that he must eliminate a dire threat (aided by some pals along the way) that could affect the entire arcade, and one that Ralph may have inadvertently started. The film plays on the heartstrings of the adults in the audience, featuring a large range of memorable computer game characters including Sonic the Hedgehog, Pacman and the adorable Q*bert. Some of the characters are used just for the sake of having them in the film and showing them off, whilst others actually become characters in the storyline of the film, which adds to the value of having them. By using these characters, which so many people have grown up with, the film is instantly becoming relevant to so many audiences around the world – these video games have become a universal language for people to play and the film feels no different.

Along the way Ralph meets a variety of characters from the games that he jumps through including Vanellope von Schweetz, a racer/glitch in Sugar Rush (played by Sarah Silverman) who ends up becoming his best friend in the film and Sergeant Tamora Jean Calhoun, the lead character of Hero’s Duty (hysterically portrayed by Jane Lynch). Whilst the first half of the film concentrates on the ins and outs of the arcade, explaining what happens when games are unplugged and why Ralph doesn’t want to be a villain any longer, the second half of the film expands the story to looking at Vanellope and why King Candy (Alan Tudyk) wants her to think she is a glitch in the game and wants to get rid of her. 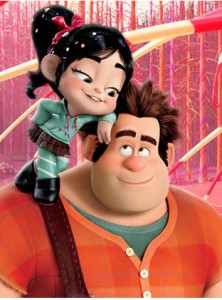 Along the way Felix (Jack McBrayer), the hero in Ralph’s game Fix It Felix has started game jumping to catch up with Ralph and bring him back. Sergeant Calhoun is also looking for Ralph because he has unleashed some sort of weird alien thing into Sugar Rush, which threatens to destroy all the arcade games!

There are certain moments in this film of pure delight and genius, including the sequence at Bad-Anon, a group for all the villains of these games to come together and remember why they are so bad. Ralph is trying to tell everyone why he wants to be good, and how he wants to have more friends and from the very beginning of the film, the audience are told that we are born a certain way and that we have to accept that and be happy with ourselves, when we are then others will start to accept us. The sequence includes various well-known video game antagonists, such as Bowser and Doctor Eggman and really is a chance to laugh at what these characters would be saying, had they had minds of their own.

All in all, Wreck It Ralph was one of the most emotionally compelling Disney films that I have seen in ages, tugging my heart strings just at the right moments. Teaching me, even at 21, that it is alright to be yourself and there is always someone around to be your friend and be there for you when you need them. The humour of this film balanced with the drama and the twists in the story, makes it one for all the family and I eagerly await news on a rumoured sequel.