Terracotta Film Festival: What They Don't Talk About When They Talk About Love | Front Row Reviews
Home
Reviews

Terracotta Film Festival: What They Don’t Talk About When They Talk About Love 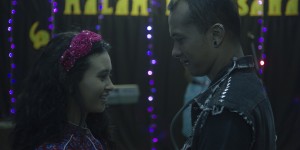 Despite its wordy title, What They Don’t Talk About When They Talk About Love, Surya’s film bares little connection to Raymond Carver, or literature of any kind. Largely wordless, her film utilises its own language, creating a filmic grammar that mirrors the impairments of her characters, a kind of sensory filmmaking as a counterpart for the various deprivations of the characters. Making equal use of sound and image, Surya constructs a film that moves in graceful, minimalist strokes, one that operates largely in glides and swoops. Surya’s mostly blind characters move about the screen like spectres, tracing the walls and handrails of the set with practised, measured movements, and the camera follows, tracking languidly beside them as gentle piano melodies accompany. The combined effect is something almost somnambulistic, the ghostly camera floating around with the blind teens like someone sleepwalking through a waking dream, setting the whole film with a soporific mood. With no distinct scenes, each feels like it has evaporated into the next.

As the camera drifts, so does the plot. Almost wordless, Surya’s film tracks romance in looks and movements. The early stages of two romantic engagements are followed as the teens in a school for visual and aural impairments stumble (sorry) their way around early love. Surya creates a kind of ensemble romance film, exploring the romantic traipses of the teens in this school without any semblance of structure or shape. Their are momentary wanders away from the romance, and away from the school, subplots involving blind balletics and supermarket shopping trips, but these feel secondary, padding even. The teens interact, and the romances blossom, but it is slow going with minimal narrative payoff. Seemingly worried more about preservation of mood than narrative revelation, Surya allows her characters to operate leisurely, slowing the film’s pace down to match the pace of the lives of the blind. As a snippet of a lifestyle, it feels realistic, but as a narrative film, it is a little trying.

What They Don’t Talk About When They Talk About Love, though covering disabilities, is entirely free of any problematic pity, or equally insufferable celebration towards the impairments of the characters. They make a large part of the story, informing the nature of the teen’s relationships, but the representation of their disabilities is laudably matter of fact. Their flirtations match their disabilities, communicating in Braille loveletters and experimenting nervously with touch and sound. One of the two romances in focus, between Fitri (Ayushita Nugraha) who can hear but not see, and Edo (Nicholas Saputra) whose afflictions are the reverse, plays upon this discordance, as the sighted boy gazes upon the girl who isn’t even aware he is present, sending messages and crossing barriers as they explore the voyeuristic potential of this flirtation.

More a mood piece that anything particularly substantial, Surya’s sophomore effort is a minor film, but a well measured one. Its aesthetic sensibility lingers longer than anything else.