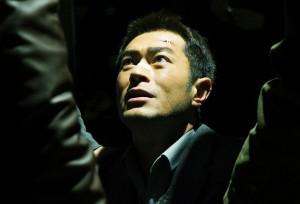 Drug War sees veteran Hong Kong director shoot action in mainland China for the first time (Romancing in Thin Air, also from 2012, was in part a Chinese production too.) While his location might have changed, to say nothing of the lure of mainland financing, his approach remains much the same. When that approach happens to embody the pinnacle of genre filmmaking though, this isn’t too much of a problem.

Drug War has To working within the crime thriller mould, of the type he perfected with films such as PTU (2003) and Election (2005), and it is no great reinvention of the genre. Indeed, Drug War is refreshingly free of the abstraction that To has imparted upon recent films like Romancing in Thin Air (2012) for instance, wherein romantic comedy played as a mirror for subtextual discussion of the image and cinema, or Mad Detective (2008) a madcap exercise in schizophrenic delirium. What it is however is a solid, almost faultlessly executed film of the genre To became originally known for, a thrill as much as a technical marvel.

To’s film follows a amphetamine producer Ming (Louis Koo), who upon his capture, offers to work undercover for the police in order to set up his criminal superiors and receive some level of statutory immunity in return. Despite cooperating with police chief Zhang (Sun Honglei) to help incriminate the druglord bosses, Ming’s dedication to the police remains questionable throughout. This wavering loyalty makes for tense dramatic material, as To weaves through a number of cat and mouse games, drug raids and car chases with trademark finesse and structural proficiency.

To derives much tension from the situations Ming and Zhang find themselves undercover in, a scene where Zhang is forced to snort line after line of cocaine in order to not break his cover has Ming using his drug cartel knowledge of the lifesaving effects of an icebath to save him. To has a command over both worlds, drug underworld and police bureaucracy, and having Ming and Zhang as an uneasy collaboration of them works as a narrative hook that enables him to interweave action and commentary with ease, examining both societies with an acute eye. Ultimately, both police and criminal forces are portrayed with the same haplessness and futility, and sympathy falls as much with the police officers losing colleague after colleague because of the selfishness of the drug producers, as with the lowly individuals who make this their trade.

As straight-laced as Drug War may be, To’s craft has never been more refined and his pacing more on point. His construction of dialogue exchanges is as thrilling as his choreography of the action scenes, benefiting from a particularly tight script from regular collaborator Wa Ka Fai. To and Ka Fai avoid a lot of unwritten rules, moving sequences into unexpected directions and avoiding genre pitfalls or emotional crux’s that would fell lesser directors.

This is all particularly apparent in the final shootout, where the clean wide angle compositions of usual dp Cheng Siu Keung allow To’s remarkably staged sequence to play out in a confined space that the viewer can follow and feel. Though free of the bullet balletics To became famed for, there is a kineticism here that only To seems to be able to construct. Ka Fai writes a conclusion few would expect of a film of this type. Drug War may be the most mutually reinforcing coming together of the three’s talents to date.

Compared to a film like Cold War, another recent big name Chinese crime thriller playing at the Terracotta Fest, Drug War seems a truly modern experience. Where Cold War spends its duration emulating the patterns of the genre To himself established, To’s latest film steps away from them. Cold War presents crime with a polished sheen and artifice, Hong Kong high rises and Mercedes Benz chases, Drug War shows it as its murkiest and most inhumane, amongst the drug trade of the gritty new China. Exactly why the Chinese censors approved it is a small mystery. Perhaps the Chinese film industry is developing as Hong Kong’s studios continue to stagnate. To’s recent migration is telling.