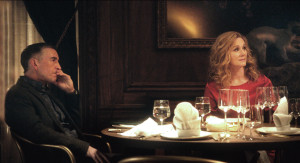 When it comes to literal titles, The Dinner certainly addresses its brief. An adaptation of Herman Koch’s novel, this is a dinner tale infused with clammy claustrophobia. It is also more puffed out and bloated than a buffet stuffed diner who’s been too enthusiastic with the lashings of pulled pork.

Richard Gere’s Stan is a politician with much to lose. His family are far from functional, beset as they are by a history of mental illness. It is a spectre that hangs heavy over them, and his brother, Paul (Steve Coogan), is intelligent, no doubt, but bears the hallmarks of this illness the most. He is prone to ill-advised outbursts and self-approbation (including slapping himself). Stan’s wife Katelyn (Rebecca Hall) is cool and steely in a rather vulpine way. Paul’s wife Claire has a warmer veneer, but it masks a character that is equally as methodical underneath it all.

There is unease at the coming together for a meal. Stan is running for office and should be out on the campaign trail instead of masticating in a posh restaurant. Events involving each of the respective couple’s children has forced them to get together, however. As their waiter treats each course to the sort of run through and break down that a scheming cowboy builder would do to a vulnerable elderly client, you can help but feel that Coogan is back in The Trip territory, but in a far less entertaining context.

The problems are many. Coogan opens the film seemingly intent on exhibiting his best Woody Allen impression when he should be sculpting his own identity. Rob Brydon isn’t here, Steve. Paul is all neuroses and misanthropy, deploying caustic one liners like a rent-a-quote speech writing hack on a mission to obliterate those around him through disdain and dismissiveness. The script pulls the audience through each course of the dinner, but tears away to investigate subplots and historical events. It is this treatment that dilutes the narrative and ensures that identity is somewhat lost.

As succinct and snappy as its title is, it could be argued that a more appropriate one would be This is What Happens When Kevin Is Talked About. A wordier proposition, no doubt, but a greater encapsulation of what is on offer here. After all, the act that Paul and Claire’s son has carried out is heinous and unspeakable. The urge to leap out and punch the screen or cry for blood is overwhelming. Maybe that is to the credit of Charlie Plummer’s performance as the recalcitrant misfit.

Echoes of the dark entanglements and trials of New York’s Durst family ring loudly in this fictional piece, but if you were so inclined to learn about that, you’d be far better off with Andrew Jarecki’s stunning mini-documentary series, The Jinx. Also, there are clear similarities to Thomas Vinterberg’s Festen. In fact, this is so indebted to that pioneering Dogme 95 film in theme, it is almost a love letter. It’s just nowhere near as effective.

The Dinner is bogged down by unlikeable characters, a loose grip on the themes and an excessive runtime. It only really clicks into gear in the final 15 minutes, but by then it is too little, too late. There’s a good 70 minute film in there somewhere. Sadly, director Oren Moverman hasn’t found it. To use the food analogy, he is guilty of biting off more than he can chew.

The Dinner played at the Berlinale 2017 and will be released later this year.