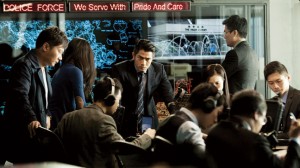 In Cold War, right from the outset, first time directors Lok Man Leung and Kim Ching-Luk are operating in a mode of excess. Within 30 seconds, through a series of schizophrenic, over the top edits, Cold War sees a few swooping skyline establishing shots, an exploding building, several careering vehicles that swerve and crash emphatically, and some gratuitous shots of a girl in her underwear. It is stylistic overdrive and it sets the tone for the film that will follow, a seductive, shiny, big budget industry vehicle, entertaining enough, but certainly not the national or even genre benchmark it is being pitched as.

Cold War was one of the biggest successes in Hong Kong cinema last year, both in terms of box office takings, and at the national awards, and it is not difficult to see why. It has all the parameters for a HK crowd-pleaser, a big name ensemble, a complicated, ever twisting corrupt cop narrative, and the required frequency of explosions and set pieces – something to show off Hong Kong’s cinematic machine. It is just not anywhere near as good as the film Leung and Luk clearly think they are making, a digital update on the seminal 2002 Internal Affairs. That film, which came from another directorial duo, Wai-Keung Lau and Alan Mak, was made 10 years prior to this new imitation, but still exceeds it in every possible way.

In Cold War, something is immediately lacking. If the barrage of audience serving visual signifiers in place of meaningful images, gun, 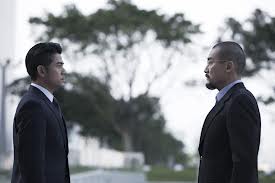 girl or skyscraper, didn’t hint that something was amiss narratively and directorially, the overdramatic music cues substituting for actual intrigue make it clear. A thumping, Hans Zimmer at his worst style soundtrack sets in over every scene, pounding orchestral ‘ha-hee-ha-ha’s’ over gleaming 108th floor board meetings as fiercely as in street level shoot-outs, suggesting a level of intensity that isn’t present in the script. The acting cast, despite prestige, too fail to match the extremity the soundtrack suggests, all but the two leads Aaron Kwok and Tony Leung Ka Fai remaining cardboard cutouts, archietypes used to propel the plot rather than enliven it.

Narratively too, Cold War comes short. The plot, following the aftermath of a terrorist heist that sees five HK cops taken hostage in a van at the same time a bomb goes off in the middle of Mong Kok, quickly becomes a standard search for the mole, with the added interest that external investigators are brought in to eke out the corrupt soul. The film isn’t written smartly enough for the audience to really care who’s at fault though, pushing out over-convoluted paths that rely too much on conveniences and contrivances to resolve them.

It is to the debut directing pair’s credit, who take writing duties too, that any of these paths resolve at all, as many similarly complex Hollywood thrillers fall into more broken pieces than this one does. Yet it is all too densely plotted, too many strands and too many characters, with little to no characterisation and even less depth. Its hard to care about the stakes being set when the characters remain paper thin, and the plotting starts to feel somewhat asinine.

Despite all of this though, Cold War does have something to offer. The set pieces that drive the film are riveting. The culminating one involving a shoot-out in a fireworks factory, whilst absolutely ridiculous, is definitely entertaining. Surprise, surprise though, it ends with a rooftop reveal. So much of Cold War seems similarly familiar, that Leung and Luk are retracing the steps of the HK crime productions they have seen and indeed worked upon (Leung as an art director and Ching-Luk a regular assistant director.) 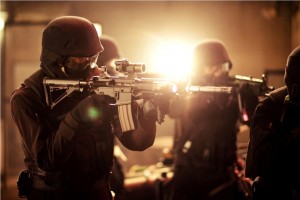 Despite familiarity, much of Cold War remains entertaining, Leung and Ching-Luk bringing a sheen and a spark to proceedings with a visual and editing style definitely informed by the recent Hollywood blockbuster style of production. Cold War is not awful, but it plays the genre entirely by the numbers, right down to the cringeworthy sequel serving ending. Perhaps the follow up can offer something that almost every other HK crime thriller has not already demonstrated earlier and better.