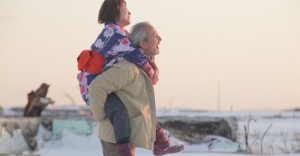 The Fukushima disaster evidently had a profound effect upon Japanese director Sion Sono, as it is a topic he can’t seem to separate himself from. His 2011 manga adaptation Himizu saw him responding to the nuclear reactor disaster haphazardly if pointedly. adding in a disaster element to that story at the last minute. The Land of Hope is his attempt to tackle the nuclear reactor explosion more directly and personally.

For a director best known for his gore and panties, The Land of Hope is a markedly mature and sensitive representation of one of the world’s most devastating moments of recent years. In many ways, The Land of Hope is more reminiscent of an older tradition of Japanese filmmaking than the distinctly modern style Sion Sono has carved out for himself up to this point. Perhaps in order to successfully engage with the harrowing material at hand, Sono had to detach himself from his usual approach. In shedding the hyper-stylised technique of recent films Himizu (2011) and Cold Fish (2010), as well as the excess of the gloriously over the top Love Exposure (2008), Sono can focus purely on what is important to a film about a disaster, character and story.

In The Land of Hope, a title which is either cynically ironic or a little too maudlin, Sono follows one family in the wake of disaster. Fukashima here is fictionalised as the retitled Nagashima (a fusion of Nagasaki, Hiroshima and Fukushima, all areas hurt by the horrors of nuclear power) but Sono’s allegorical cloth is marginal at best. In the film, he makes no attempt to hide what he is portraying, characters often referring directly to that ‘Fukushima incident’ that happened ’20 years ago’ in the film’s universe. Remember Fukushima they ask? In creating Nagashima, Sono asks his audience to remember a nuclear history that runs further back than 2011.

Nagashima is hit by a tsunami which causes an explosion in the area’s nuclear reactor, forcing evacuation. Whilst an elderly farm-owning couple, Yasuhiko and his comically demented wife Chieko refuse to leave their lifetime home and farm, their son and his wife, Yoichi and Izumi, leave for a less irradiated area in which to raise their son. Meanwhile, another neighbouring young couple also set off to look for their parents, who lived in the town the tsunami hit. Sono sidelines their story almost entirely, to the point that its inclusion seems pointless.  Instead, he focuses heavily on the stubbornness of Yasuhiko, the neurosis of Izumi, and the uncertainty of Yoichi, (Chieko mainly serves as comic relief) using these traits to demonstrate the tie between the disaster and their character, how the crisis forces their essence outward, and strengthens them as a unit.

The conflict, between wanting to stay home where the family cows and trees are, and wanting to flee for the future’s sake, is mined for all its emotional worth, yet Sono’s story rarely feels emotionally exploitive. Melodramatic certainly, and towards the end borderline histrionic, but for whatever reason, Sono’s empathy for the plight of Japan feels earnest, his look at the fears and concerns of the everyday citizens honest and affecting. When Izumi dons a yellow nuclear reactor suit and pushes her trolley through the supermarket, measuring every vegetable with a geiger counter, the people around her are laughing, but Sono isn’t. In his film, there is a palpable warmth, and the presence of an understanding. Japan’s fear is Sono’s own, their anger and pain too his.

In another supremely affecting moment, Chieko, having escaped her husbands care and pushed into the radiative red zone, is dancing in the nuclear snow (shot in the real devastation of Fukushima,) reciting the patterns of the Festivals of Souls of her youth in her kimino from the time. Yasuhiko, on finding her, gives up on dragging her home for a few minutes, and dances with her. Its preposterous, and more than a little obvious, but something about it feels real, due perhaps to the strength of characterisation across the wandering two hours before it.

The Land of Hope is not the most tidily constructed of films, as perhaps might be expected from this director. Sono cuts back and forth between family members, trying to create a cross-sectional image of Japan in disaster, from the disarray of rescue centres, to the paranoia and hostility of towns outside of the disaster zone but under peril of wind carried radiation, and the straight up ruin of the affected, nuke-snowcast areas. The portrait of some areas is more complete than others. Sono is particularly strong at drawing out the irritation of hitting bureaucratic dead weight and meeting invisible walls (and invisible bullets) Further, the sense of dread and uncertainty in the opening hour as the evacuation begins feels incredibly realistic, due in part to the minimalist documentarian visual style utilised uncharacteristically by Sono, yet his picture of rescue camp despair is far less well realised, underseen and underdrawn like it was cut out of a much longer original product.

Sono’s Fukushima film is overlong, indulgent and often unclear what it want it wants to do, but in spending all this time with the family, from safety to separation, Sono affords a little emotional investment. As a distinctly Japanese approbation of the strength and importance of family ties, set against the weight of disaster, it is touching. Because of this, despite loose plot strands, excessive length, sporadic tonal overflow into excessive melodrama and overstated metaphor, something lands. With it’s acute vision of familial life, subtlety and humility, The Land of Hope feels like Sono channelling his peer Hirokazu Kore-eda, though he has a way to go to reach even that height.

The Land of Hope was made in partnership with Third Window Films and will be distributed by them in the UK later this year.