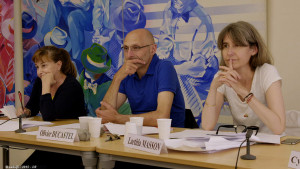 It is an ironic counterpoint to the nature of the business taking place, but a wander around the austere corridors and bland white washed-walled classrooms of Paris’s famous film school La Femis provides an inauspicious setting for what is a cutthroat hotbed and home to a brutal process of assessment.

Many of the students here have faced rejection from this prestigious school before. Undeterred, they apply again. And again. And, often, again. In their eyes, the perseverance is worth it. The name alone will open doors in their future career and the skills learned will provide the foundation blocks to set them apart. Mind you, some might see the conditioning process as more of a way of eliminating character as much as fostering a unique streak.

Claire Simon’s film operates much in the same way Errol Morris’s early documentary work functioned. That is to say, without any interference on behalf of the filmmaker. There is no timeline or guide, no face or voice. We are deposited as the fly on the wall to a number of unrelated pitches and discussions. At times, the lack of central narrative to the documentary forces attention to wander, but this is a fascinating window into an exclusive, coveted world. 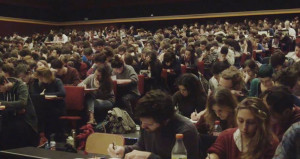 Is La Femis the hunting grounds from which the next Rohmer, Goddard, Kerchiche will emerge? In any event, is talent enough to get within its doors? Or is it all about ‘fitting in’? Or is it about fulfilling the diversity criteria? Does background play against, as much as for, the applicant? Do old prejudices predominate the establishment? There are arguments in all camps. This intriguing documentary provides a balanced picture in carousing frustration, as well as reasons to be cheerfully optimistic about the future of French cinema and that cherished concept of the auteur.