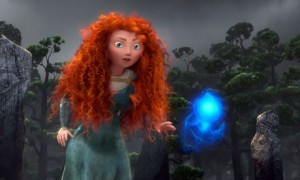 Whether they are retired superheroes, outcast ants or insecure toys, Pixar have been consistently making films about males. This isn’t necessarily a bad thing, it just means that immediately Brave is something a little different to anything Pixar have done before. Remove their arch wit, take away a modern or futuristic setting and this becomes an entirely new kind of film for the House of Lamp. Not worse, in any way at all, just different. A traditional, mythic story with a female lead and the central relationship as a maternal one and Brave becomes a risky investment for the studio but also a vital breath of fresh air after the irredeemably stale Cars 2. It also comes with a big, beating heart. Brave is not what you expect and that’s a very good thing.

The central conceit of the plot has been kept mercifully absent from trailers, reduced to references about changing fates and perhaps with a spell thrown in there, so that won’t be ruined for you here. What has been clear from the outset is that Brave is really a film about the bond between a mother and a daughter, a bond that becomes strained when your mother is the Queen and she wants you to marry the son of one of your tribal allies. Merida faces that exact situation and she is so fiery and individual that she will do whatever she can to fight this. What follows is a slightly unexpected version of a coming-of-age tale, set against the backdrop of a fantastical version of Scotland.

It is, indeed, fantastical, so those expecting a more realistic Scotland, or even one that avoids the classic tropes of kilts, haggis and bagpipes, may potentially be disappointed. All three are present and correct for this is the Scotland of legend, where will o’ the wisps lead wayward travellers on their paths, and clans batter each other whilst occasionally painting blue on their faces. Brave’s original title was The Bear and The Bow, which would have been far more fitting for the mythic tone of the film, which in atmosphere, story and setting feels like an authentic legend. For those with horrible flashbacks to Braveheart, don’t worry. This is far enough removed from reality (one clan is called Maguffin, and there is a talking crow) to ensure it isn’t as grating as the destruction of actual history and culture in Mel Gibson’s film. A strong voice cast featuring – gasp – actual Scots (Kelly Macdonald in the lead is perfect, Billy Connolly is similarly great) means that it also sounds a little more like a Scotland we might recognise.

It’s all brought to life by CG animation that, at times, beggars belief it looks so good. Pixar have always been strong with their attention to visual detail, but Brave takes that to another level. Every frame is intricately composed, featuring details that set it apart from any other computer generated animation: the way that light shimmers on dresses; the bounce of thick, curly hair; the slight swaying of thousands of blades of grass. The wider shots of landscapes – large sweeping vistas of mountains, waterfalls cascading over rock faces, castles on sea swept cliff tops – are jaw-droppingly beautiful, too. This display of commitment to the story, and to telling it so well, is what separates it from the competition. It may well be hijacked for the Scottish tourism industry, but that is a testament to just how well this film is made. It’s absolutely stunning.

Yet it is the heart of Brave, powered by the themes of family and reconciliation, that will earn it fans worldwide. Merida and Eleanor, although royals in ancient Scotland, have an appeal that is universal, so tenderly is their relationship etched. Whilst clearly at loggerheads there is still a love that is very evident between them, even if they don’t show it to each other. There are some absolutely devastating moments, when tempers are frayed and they do things they regret. Part of what makes this work so well is Merida herself, a fantastic heroine who is both intelligent and foolish, and proving that a female lead can be as engaging and as winning as any man, ant or toy. Merida owns the film, and is one of Pixar’s finest heroes, although she feels like she’s come from a Studio Ghibli film, such is her fierce spirit.

The ending is, of course, triumphant, but the strong emotions of seeing a family reunited are fully earned by everything that has gone before. As the soaring celtic score (yes, it has one of those, too) kicks in for the final shot, many people, both male and female, will be choking back happy tears because in Brave they feel more hard won. A great, traditional piece of storytelling that is beautiful in its simplicity, Brave might just be the best Pixar film yet, even if it doesn’t especially feel like a Pixar film at all.