The Diary of a Teenage Girl DVD Review 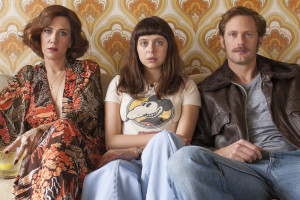 Marielle Heller’s The Diary of a Teenage Girl is a hugely interesting piece of cinema, which explores female sexuality as a way rarely portrayed on screen and it really should be seen. Set in San Francisco during the 1970s, The Diary of a Teenage Girl stars an incredible Bel Powley in the central role of said teenage girl, Minnie, a cartoonist who has just discovered the world of sex and what that means for her as a person, as a teenager, a daughter and a girl. She decides to start an audio diary to record the way that she feels about sex and sexuality and as she grows to learn to see herself as a different person but also how people around her start to view her. The issue is that Minnie is 15 years old and the man she is sleeping with is her mother, Charlotte’s (Kristen Wiig) boyfriend, Monroe (Alexander Skarsgård).

The film is often narrated by Minnie who waxes lyrically about how she feels every time she has sex, especially as she doesn’t see herself as beautiful or worthwhile to boys or men. She doesn’t think others notice her and at the start of the film believes she she needs to feel loved – these are deep and important feelings to explore, especially whilst being a teenager and Heller’s film does this responsibly and filled with emotion. Charlotte, divorced from Minnie’s father, Pascal (Christopher Meloni) appears to be taking part in a revolution all to herself – she can’t hold down a job but is learning about herself – her own sexual identity and place in the world. Minnie seemingly begins a relationship with Monroe, he picks her up from school where she starts to get attention from other boys and goes back to his place to have sex. She dreams of a future where this affair usurps her mother’s own relationship and truly believes that Monroe loves her.

There are many things that makes Heller’s film so very rich; performances from the central three players are extraordinary and the 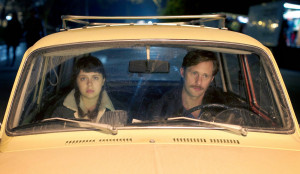 chemistry between Powley and Skarsgård is often electric but also the visual style of the film. From the props, to costumes and locations, 70s San Fran screams with colour all over the place. Mixed with the cartoons that Minnie draws or reads, which comes to life and often illustrate how she is feeling at the time, The Diary of a Teenage Girl is a cinematic treat, filled with so many textures that allow the audience to actually feel what they are watching.

Unfortunately the second half of the film just doesn’t feel as strong as the first and it often depends a little too much on the melodrama of the situation with Minnie running from rooms every few minutes angry for one reason or another. Her relationship with sex also blossoms fast and furiously, which (to this reviewer) is both a strength and weakness of the film as it is easy to get lost in the story during the second half.

That aside though, The Diary of a Teenage Girl is urgent and important viewing for a whole multitude of people – it is another step forward for good female storytelling and representation on screen and proves Heller as a talent to watch out for, both in terms of screenwriting and directing.