This review offers a response each from our writers covering this year’s London Film Festival. 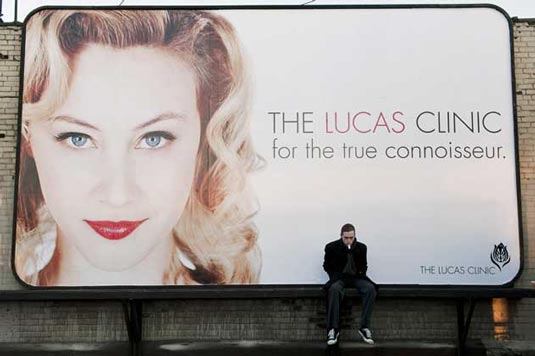 Antiviral in it’s strongest manages to provide us with a clever satire on the celebrity obsessed culture that we are now living in; Brandon Cronenberg seems to furthering the practice seen last year by Charlie Brooker who brought us the television mini-series, Black Mirror. To be completely frank, many may see this sort of writing as preachy and telling the audience off for being interested in something based purely upon name, but ironically, Cronenberg Jr. may be blasted for exactly that – many will watch this film based up who his father is. Of course, the son has learnt from the father but that doesn’t take away from the talent that Brandon has exhibited during his debut feature.

In a not too distant future, we are now living in a world that is so ruled by our love for celebrity (whether they have an actual talent or not), that illnesses are now being extracted from these stars and people are paying to be infected by the same germs. The body horror themes and manipulation of the human form is further examined by the fact that slabs of muscle (‘steaks’) grown from cells from the celebrities are sold off for people to eat – this is an almost cannibalistic world that we are now living in. But you could argue that this is simply a metaphor for the cannibalistic instincts of fans and the media, which look in at the world’s of celebs today.

The film focuses upon Syd March (Caleb Landry Jones), who does an outstanding job as someone as obsessed as the rest of the world with the celebrity, Hannah Geist (Sarah Gadon), who is the most beautiful, the most perfect and if she becomes ill – well then, everyone wants a piece (literally). Jones does one of the best performances I have seen this year, fully immersing himself in the manipulation of his body. He is constantly piercing himself with needles, a quick way to get the illness into his blood, and this almost aligns the body with the machines which manipulate the illnesses by adding copyright. No longer are people looking after themselves, but instead they are manipulating their genes to get closer to the stars they love.

Another interesting issue raised in the film is the argument of copyright – something, which the Lucas Clinic is shown to be at the top of their game in. The illnesses are manipulated so that they cannot be sold on the black market (but Syd finds away around this) and I believe Cronenberg is making another point about our culture, where copyright and stealing have become almost a daily norm – rather than paying for something and observing that there are workers that must be paid, they are finding ways to get it on the cheap.

For me, at it’s weakest, Antiviral, could be accused of being a touch over-stylised – the tone of the film is dark and this works gracefully against the very clean, clinical, white surroundings of much of the film but added to the white, fleshless, dying body of Syd and the entire film becomes far too claustrophobic for the points that it is trying to make, which are pretty large. It suffers this by mirroring the Lucas Clinic offices with Syd’s own flat, and again with the offices of the rival company at the end.

What it fascinating about the story is the fact that narratively, there is a pretty decent horror/thriller in there as well as trying to make these worldly points. The story itself is pretty strong (if a little drawn out), and does have a decent number of twists throughout which do keep the audience guessing. For me, the body horror elements were fascinating, especially in comparison to some classic cinema like Tourneur’s Cat People (1942). Specifically a sequence when Syd’s body completely distorts and becomes part machine (as mentioned earlier, the alignment between man and machine) is horrfying and satisfying at the same time.

For a debut feature, it’s a massively large piece of work to take on, considering the thematic points as well as the style of direction; but it’s a worthy start for Cronenberg and I look forward to more.

At one point during Antiviral, the incomprehensibility of its plot no longer seems to matter. A loose succession of riffs on a theme, the film is a welcome and rather old-fashioned return to a kind of filmmaking that is ideas- and image-driven. In this sense, comparisons to debut director Brandon Cronenberg’s father David are inevitable and, perhaps contrary to expectations, profitable. With its dystopian setting and a focus upon inter-corporation infiltration, Antiviral recalls Scanners (1981); its gradual incline towards a claustrophobic, nightmarish subjectivity that never quite resolves itself echoes Videodrome (1983); and as an exploration of bodily limitations in an age of technocrats and beauty clerks, it resembles The Fly (1987).

More generally, Cronenberg, Jr.’s first feature injects new and unsettling energies into body horror, the genre to which dad’s work helped contribute and cement. In a celebrity-obsessed future, Syd March (Caleb Landry Jones) is employed by a beauty clinic to sell customers viruses that have been extracted from their favourite stars. One such star is Hannah Geist (Sarah Gadon), a “beyond perfect” blonde famous for being famous, whose illness Syd secretly injects into himself at home. When Geist’s own virus turns out to be fatal, however, it’s feared she is the victim of an assassination attempt. With his own health deteriorating (depending upon a walking stick, he cuts a twisty figure similar to Christopher Walken’s Johnny Smith in The Dead Zone, 1983) Syd becomes part of a murder mystery beyond his grasp.

There’s a clinical veneer to all of this, and it’s the images that linger most. Some of these images are referential, conveyed through language alone. To customer Edward Porris (“porous”?), for instance, Syd says Geist’s eyes “seem to reach right beneath your skin and touch your organs”. In another scene, we hear characters casually discussing a celebrity’s missing vulva, and speculating as to the possibility that she has a dysfunctional organ in her urinary tract. As the film enters its stuttering final third, however, literal images begin to haunt us: the many close-ups of needles piercing flesh are less discomforting than that sequence in which Syd imagines himself literally converging with a machine, to the tune of thunderous synth drones that invoke an interior throbbing. Such disturbing imagery (giving the viruses a Francis Bacon-like facial distortion is particularly inspired) is made all the more effective by the sleazy offset of wry humour: as one character tells Syd well into the film, “I’m afraid you’ve become involved in something sinister.” 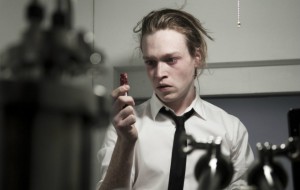