Byzantium is a thrilling, beautifully made ode to the traditional vampire film. It glows amongst the vast sea of horror films, which constantly seem to fill our cinemas and tells a delicate story, which touches on so many themes about what it means to be human that you forget you are watching a film about the supernatural. What is possibly most interesting about Byzantium is that we would probably forgive it’s flaws had it been made 20 years ago but today it really does stand out; both for it’s unique twists on the vampire story but also because Jordan’s filmmaking doesn’t seem to have progressed since the days of Interview with a Vampire & The Company of Wolves; in other words, this is a very traditional, old fashioned film, which feels somewhat dated for a film made last year.

The film has an interesting premise, which is slowly exposed throughout its two hours. Today cinema is filled with fast plots, thrills for the sake of it and somewhat less attention to detail, but Byzantium is very careful in the ways in which it lays the story out. We spend the majority of the film in a coastal town in England with Eleanor (an absolutely stunning performance by Saoirse Ronan) and Clara (Gemma Arterton) who tell everyone around them that they are sisters as they look about ten years apart but gradually we start to learn they are in fact mother and daughter, are both 100’s of years old and are vampires, with dark and dreadful secrets. Whilst at first we assume they flee for survival, without getting too much attention from those around them, we learn that actually they are being followed by The Brotherhood. This group of male vampires have been searching for Clara after she become the first female to actually enter into this community of bloodsuckers and gain eternal life; she further broke their laws when she helped Eleanor become a vampire as well. On top of this Clara is just trying to be a mother who can put money on the table for her daughter and she uses her sexuality in anyway possible to do so. Whilst Eleanor is trying to lead a normal teenage life, which suddenly becomes twisted and confusing when she falls for Frank (Antiviral‘s Caleb Landry Jones) who is the first person, she opens up and tells her entire story to.

The story could sound a little convoluted and confusing, it really isn’t so because the pace of the film allows for all the stories to be given enough time to 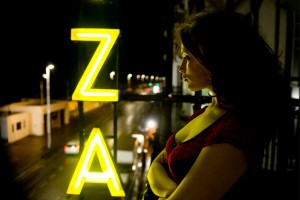 flourish naturally from beginning to end. The exposition is further aided by flashbacks to before Clara becomes a vampire and meets Darvell (a subtle Sam Riley), a soldier who captures her attention. When Darvell introduces the prospect of eternal life to Ruthven (Jonny Lee Miller), that is when she decides to take life into her own hands; she has nothing else, is dying and is treated badly by the men around her, so she decides to become a vampire instead.

Where Byzantium really succeeds is Jordan’s atmosphere that he creatively puts together; there is an old fashioned gothic nature to the film, which we haven’t seen for such a long time in horror cinema. His camera carefully sires each of the characters on screen; it admires them and bathes them (particularly Ronan and Arterton) in beauty. We spend a great deal of time looking up at the characters, which emphasises their importance on screen and the need for them to look down at us so that we can see their inner emotions. It is also a very exploratory camera, which seems just as interested in showing the cracks in the locations around them; it dives and twists with the scenes in order to make the settings become just as integral as the action itself. Jordan also moves very slowly, which creates a haunting affect to the film, making it bloodily beautiful. The atmosphere is further aided by the carefully chosen soundtrack, filled with choirs and orchestral pieces, which fill the ears of the audiences with high pitched sounds, perfect to create a gothic atmosphere. A stand out sequence, which is repeated throughout the film is the way in which humans gain eternal life and become vampires; Jordan creates a mystical and beautiful location in the mountains where the water runs down the hills. Once inside a small cave in the hills, the water quickly turns to blood and you are taken away from this mortal plane as something dark takes your soul away. It breaks all the rules of vampire films and keeps the audience alert. 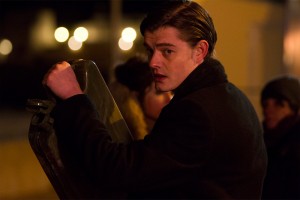 What is also hugely interesting about the film is how much information it gives the audience, but also how much it reserves its right to tell. Whilst we are introduced to The Brotherhood (led by Riley, alongside Thure Lindhardt & Uri Gavriel) and their rules about women as vampires, we are never told why that is the case, the audience are just expected to understand. This creates a wonderful homoerotic atmosphere, which is rarely touched upon in the film but it certainly is something, which has followed the gothic vampire throughout literature and film. There is a feeling that these men are close and they have been together for 100’s of years without issue; but it is the woman who threatens the balance of everything, which they have worked for. Their representation is reminiscent of so much classic cinema, where women are instead objects to be desired but they have no right to understand the man’s world. In the end it is the woman who brings down the tight knit community of The Brotherhood and unleashes uncertainty throughout the characters.

The casting of Byzantium is so very interesting to consider because ultimately, it is an incredibly strong, varied and rich all star cast and that is certainly needed to be able to tell this sort of story. Focusing briefly on Ronan and Arterton; they work perfectly in their roles. Ronan has been an interesting actress to chart since Atonement and she continues to go from strength to strength. She is compelling, emotional and completely watchable throughout the entire film. She is the reason for most of our emotional attachment because she truly is able to represent through careful nuances what it is like to stand out and be different. She forces us very quickly to side with her and makes the audience trust her as she is telling us more of the story of her life. Arterton on the other hand seems to have just walked off the set of Eastenders or Coronation Street; whilst it could be annoying to some of the audience, she actually perfectly suits this role where she has to be slutty and bitchy and yet still remain with a very good heart. Both are completely stunning on screen and Jordan keeps reminding the audience of this with close ups on their faces and carefully watches their bodies on camera. The rest of the cast is just as imaginative and inventive as any other film at the moment;  Jones played Frank, the boyfriend of Eleanor. He seems to be the embodiment of gothic body horror as we previously saw in Antiviral. He cleverly contorts his body throughout the film to give the impression of a very ill looking boy, who carefully contemplates what is going on around him; his body echoes his thoughts. The chemistry between Ronan and Jones is endearing and so unthreatening to what is going on in the film, that are audience are drawn deeply into their relationship.

Briefly, the characters that Jordan has created in Eleanor and Clara are so interesting. To have two beautiful and yet deeply flawed female leads in a

vampire film is something rarely done; both have so many layers that you want to discover. What is beautifully portrayed is the blurring between good and evil. Although Clara is shown as a very powerful woman and vampire, who always gets what she wants, she is also shown to always look down and help those in need. She takes in the girls from the streets and gives them somewhere to sleep but they have to work for their keep. The only time we see her feeding in the film is on the man from town who has been taunting the girls on the street and treating them badly. Eleanor is just as interesting, she feeds a lot in the film and effectively is killing people but she makes it clear that she only sucks blood from those that are ready for death. In multiple scenes, she is seen sucking on the arms of the elderly, who are ready to die and believe she is an angel, coming to take them away. This makes the audience question throughout the film whether they are integrally bad people or if they have hearts and are instead stuck in the situations and their nature. The climax of the film embodies this theme when the parental relationship between the two comes to a head and Clara sacrifices herself for a daughter.

Byzantium is a film, which truly deserves to be seen. It is a beautiful exploration of human emotions and traumas as seen through the eyes of vampires. Delicately shot and tells a compelling and needed story, it is traditional and will gain a cult worthy status.