AV Festival, the theme-inspired leading international festival of contemporary art, technology, music and film, returns this year with an impressive line-up of events across Newcastle, Gateshead, Sunderland and Middlesbrough. Following its fourth ten-day run in 2010, the UK’s largest biennial festival of its kind has expanded for 2012 to run throughout the entirety of March.

Taking as its theme the idea of slowness, the festival is named this year after “ASLSP (As SLow aS Possible)”, a piece composed for organ in 1987 by John Cage, whose quotation heads a press release from last August: “If something is boring for two minutes, try it for four. If it is still boring, then eight. Then sixteen. Then thirty-two. Eventually one discovers that it is not boring at all.”

As festival director Rebecca Shatwell puts it: “The ambitious artistic programme for the Festival expands the previous ten-day duration to a month long slow edition. The artists have responded to ideas of slowness, duration and acceleration to create work that will enable us to pause, reflect and think about the world in new ways.”

Incorporating works that last the whole 31 days of March, others for 24 hours and others still for only fleeting moments, this year’s festival features over 100 artists and 22 exhibitions, 70 special events and five (slow!) weekends of concerts, films, talks and walks,  not to mention a 744-hour continuous online radio. All of these span over 30 venues, including BALTIC Centre for Contemporary Art, Sage Gateshead, mima (Middlesbrough Institute of Modern Art), The National Glass Centre, Tyneside Cinema, Great North Museum and others, including found public spaces.

In a disused space in the centre of Newcastle, meanwhile, the UK premiere of Jonathan Schipper‘s car crash spans in slow motion the entirety of the festival before reaching its end.

Over six hours, every day for 31 days, the world premiere of UK musician Susan Stenger‘s new outdoor sound installation within the dramatic architecture of Newcastle Civic Centre progresses through a full annual lunar cycle, while Jim Finer, a sound artist formerly of The Pogues, stretches an LP to 24 hours for each of the festival’s 31 days.

At Platform A gallery at Middlesbrough train station, a single 11-seconds shot of a factory worker leaving his workplace, taken from James Benning‘s 1971 film Time & A Half, is stretched to 31 minutes.

Between Sunday 4th and Thursday 29th, Newcastle’s Star and Shadow Cinema and the Tyneside Cinema host over 30 films designed to introduce viewers to the idea of slowness in film. Highlights include Cristi Puiu‘s Aurora (2010), Nuri Bilge Ceylan‘s Once Upon a Time in Anatolia (2011), Bruno Dumont‘s Hors Satan (2011), Pedro Costa‘s Colossal Youth (2006), Albert Serra‘s The Knight of Honour (2006) and Sivaroj Kongsakul‘s Eternity (2011). 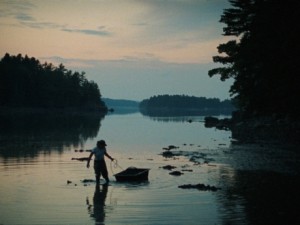 The film selection also boasts the presence of several leading principals. As part of its opening weekend, Americans James Benning and Sharon Lockhart are on hand to each introduce their own work, Nightfall (2011) and Double Tide (2009, pictured right) respectively.

The aptly-titled Slow Cinema Weekend meanwhile, runs from Thursday 8th till Sunday 11th, and features screenings of films by Lisandro Alonso of Argentina, Fred Kelemen of Germany, Lav Diaz of the Philippines and Ben Rivers of the UK. On the morning of Friday 9th, these four filmmakers are joined in person by Jonathan Romney, George Clark and Matthew Flanagan for a discussion panel on the current trends within contemporary Slow Cinema.