This is the second in a series of five editorials on the AV Festival’s Slow Cinema Weekend, which ran March 8-11. [Part 1] 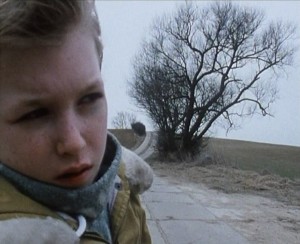 Frost (1997), the second of three films directed by Fred Kelemen between 1994 and 1999, is a slow-burn 201-minute trudge through that bleak liminal space between the end of one calendar year and the start of another. The blackest of all Christmas films, its road movie narrative unfolds like some descent into an increasingly abstract, frozen-over hell.

It’s also very beautiful in its way. The opening shot – like a scene from late in Stalker (1979) – depicts a young boy seemingly floating asleep along an empty Berlin street. Gradually widening, the shot reveals the young lad – seven-year-old Micha (Paul Blumberg) – sits propped on his drunken father’s shoulders, the latter (Mario Gericke) struggling somnambulantly back home. A barking dog and a Christmas tree lend surreal absurdity to proceedings. The second shot is an aerial view that defies a human perspective, slowly twisting as it descends centrally down an apartment block’s stairwell, like some tripped-out imitation of Vertigo (1958).

Not long after, we return to this stairwell with an all-too-human point-of-view, as Micha stands to catch water leaking ceaselessly from a drain, its visual serenity providing him emotional externalisation as we hear what he is evidently trying to drown out: the sound of dad raping his mother Marianne (Anna Schmidt). In this world, the humans are accustomed to brutality: their buildings cry for them. Marianne’s beating is one too far, and she wakes Micha in the night and sets off into it with him, packed with minimal luggage and maximum relisience.

A nightmare of neglect and abandonment, the film unfolds in a succession of terrifying episodes, absorbing in their atmospheric intensity and patient crawl. Peril is never far away. A funfare is presented as some carnivalesque horror; a glacial walk over a field of ice anticipates the salt flat trod-at-dawn in Gus Van Sant’s Gerry (2002); a black BMW pulls up alongside Marianne and Micha on a provincial road, its driver unseen as it rolls forward in passive-aggressive, stop-start stutters. A story of escape, Frost inverts the pattern of Stalker – if that film involved three characters negotiating their way into a place, this involves two pilgrims struggling away from one.

Moments of levity are given a pulsating delirium. At the funfare, Marianne enjoys the delights of the Chair-O-Planes, the camera following her in dizzying cyclicality. Later in the film, she is left alone in a stranger’s mansion – that of the BMW driver (Isolde Barth), who turned out to be far more menacing and Lynchian than expected – as we witness an extended dance to Euro-trance that plays out like some epileptic seizure. Both instances of euphoria are followed by sobering fear: at the funfare, Marianne alights the swings to find Micha has gone missing; in the later scene, she finishes her dance to find the mansion’s owner naked and bathing her son suggestively.

As both scenes intervene on the singularly grim mise-en-scène, there’s a sense of latent trauma at work. Played excellently by Schmidt, Marianne seems to have become a mother too soon in life, and her pilgrimage is one by which she endures the balance between responsibility and care-free joy, vying for the same attentions and protection she must provide her son. Similarly, the film develops into a complex coming-of-age story for young Micha, who sleeps through most of the opening third before evolving, as his journey progresses, into a less emotionally contained premature adolescent. Clearly wrestling with nascent Oedipal tensions, he calls home to father: it remains unclear whether this is for help or if the desire is something more murderous. 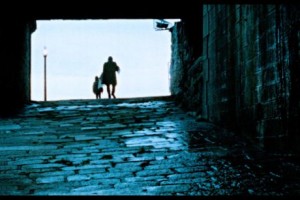 With its church bells, howling winds and bleak landscape, Frost feels like it could be an offshoot of Béla Tarr’s Satan’s Tango (1994). Like that film, this sustains an aesthetic beauty that runs parallel to the sunken depravity of its subject matter, enfolding and strengthening it as its odyssey heads towards a Joycean bar scene found at the end of civilisation. New Year celebrations kick in, the bangs and screeches of overhead fireworks sounding like some long-overdue cue for the apocalypse.

Before and after Frost screened Kelemen’s Fate (Verhaengnis, 1994) and Nightfall (Abendland, 1999). As a whole, neither work reaches the heights of the 1994 film, though some things can be said of each.

Fate opens with a menacing accordion that accompanies a montage of faces, each evoking some socially neglected soul. The accordion belongs to immigrant Russian busker Valery (Valerij Fedorenko), who suffers abuse, humiliation and exploitation at the hands of others. His lover is Ljuba (Sanja Spengler), from whom he is separated. Each goes their separate path, and over the course of one night, society’s woes and toils bring them back together. Asking what remains of one’s humanity once past the point of despair, the film paints the very bottom of the social ladder with a strange Romanticism.

The film was shot on Hi-8 and transferred to 16mm, giving it a unique, fuzzy texture of fitting lo-fi dreariness, as its cast of characters drink themselves to a kind of revelatory ruin. Permeated thoroughly in a seedy stupor, there’s a heartbreak contained in each of its twelve long scenes, one that seems to go beyond the grim’n’gritty clichés of low-end melodrama. Fate dances a fine line between emotional transgression and unpleasant nastiness, inheriting the thematic concerns of Rainer Werner Fassbinder and anticipating the aesthetic provocations of Harmony Korine. We watch its helplessness helplessly, as Valery is paid like a dancing bear to down a bottle of vodka and Ljuba runs sprawlingly along a street in nothing but a flailing gown, her fragile humanity on open display.

Shot by Kelemen in sustained 35mm takes, the film’s scenes are rudely interrupted by lo-res video cut-aways, as Anton and Leni undergo a journey that’s insufferably grim in ways Tarkovsky never was. While Leni throws herself into sexual mistreatment, Anton meets a stranger whose daughter has been missing for days. In a scene that takes the bells-as-apocalypse motif to new levels of absurdity, the man pleads with Anton to hoist him up into a bell and ring it; unfolding at a languorous pace towards the inevitable, the scene concludes with Anton ceding to the stranger’s wish, as the latter’s blood splatters down upon him to the deafening sound of ringing.

If Fate and Frost unfolded to the unheard rumbling of threat – barely kept at bay through alcoholism or mental toughness – Nightfall foregrounds sexual violence and makes poor victims of the good. There’s a palpable unease to scenes like that in which a young child is beckoned into a nightclub’s backroom and placed onto a billiards table, the camera panning right, to the viewer’s groan, to reveal a cameraman and a line of suited blokes ranging from the effeminate to the burly. None of this is going to end well; the film establishes its sleaze to the point at which we might reasonably expect the worst when Anton happens across a tranquil-cum-wounded swan atop a spoil tip – is he going to kill it, or fuck it?

Holding each of these otherwise individual films together is the concept of love, the emotion that allows us to sustain hope when all else has gone to pot. Often fetishistic in its nihilism, Kelemen’s triptych nevertheless provides for each of its tainted lovers a way out of a shared self-destruction. In fact, getting out is the easy part, it’s the surviving beyond that that proves nigh-on impossible.