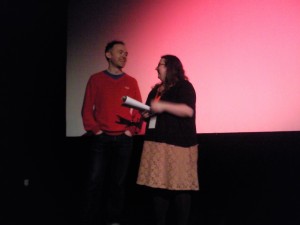 Ben Rivers‘ consistent presence at Newcastle’s Star and Shadow cinema brought a welcome sort of intermingling to the AV Festival‘s Slow Cinema Weekend. With his face already familiar to those who attended the panel discussion on Friday morning, Rivers also emerged on Sunday night from the sixteen hours given across the weekend to Lav Diaz’s films; fellow survivors could now boast about having shared this kind of cinephile’s initiation ceremony with an actual filmmaker.

Ironically, the Slow Cinema Weekend was a busy concentration of resources and people, and for it, artists and mortals – and critics who sit somewhere in between, like Jonathan Romney – shared an inclusive physical and perhaps even intellectual space. For it, Rivers had to play both sides: an audience member for others’ work, he also presented two of his own films.

The extent to which Slow Action (2010) fits into the “slow cinema” trend is open to debate. On the more fictional side of an essay film, the “slow” in the title refers to the evolutionary process as laid out by Darwin; the film continues its director’s interest in “island biogeography” – the formation, distribution and evolution of life forms particular to their respective environments. Set in an unspecified future, the film utilises illustrative imagery captured on four islands across the globe and fictionalises them, presenting each as a new discovery in the aftermath of an apocalypse.

Though it’s billed as “post-apocalyptic science fiction”, perhaps a better phrase is “post-apocalyptic scientific fiction”, because the work possesses a deliberately put-on obsession with the forensic; its narration – written by Mark von Schlegell – resembles the investigative curiosity of Victorian literature, written by explorers going off into undiscovered worlds. 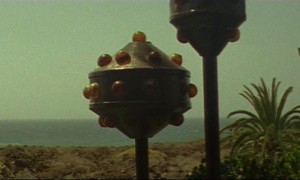 At a self-conscious remove from authentic scientific enquiry, however, the script here consists of an almost uneasy blend of mathematical gobbledygook and pretension, perpetuating a kind of alternative, self-made field of encyclopaedic knowledge. Happily, viewers were supplied with a print-out of the script to read less alongside the film than at their own leisure.

One snippet of narration reads: “Some say the first series brought mathematics, the only memory of the Old Earth, to form the crucible of a Utopia’s founding. Certainly it is the centrality of this discipline that distinguishes Eleven from other entries in the Great Encyclopedia.” Later on: “In the rim, the geology is distinguished by outcrops of obsidian whose encounters with lava and boiling water have left if folded, pressed and uncannily similar to petrified skin of an impossibly ancient body.”

The voice-over’s density, of course, becomes an aesthetic layer in itself. The ostensibly more “concrete” information of the words we hear acts as a kind of deferral device, acting less as a means of complementing the imagery than enhancing their abstraction. The imagery itself is extraordinary. Shot (and screened) in 16mm, the film carries a materiality that adds to the tension between shooting things as they are while encapturing or striving back to how they might have been.

Indeed, Rivers fully embraces the blemishes of his medium, and the immaculate images captured on old stock lends a real physicality to the work. Asked after the screening how important hand-processing his own films is to him (removed from standard industry practice, he does it in his own kitchen sink), Rivers replied, “It’s very important to me. My own physical involvement works with the whole post-apocalyptic thing; hand-processing is a way of self-sustaining, it ties in with meeting people living off in the wilderness.”

Four disparate wildernesses are depicted in Slow Action. The actual locations of Lanzarote, Gunkanjima, Tuvalu and Somerset double respectively as the fictional islands of Eleven, Hiva (The Society Islands), Kanzennashima, and Somerset (made an island due to rising sea levels). Each world is visually distinct; while there seems to be something very English in the bathos of building up to the anticlimactic intertitle of “Somerset” following the preceding mouthful, the concluding episode is a genuinely eerie piece that borders on the disturbing. For it, Somerset-born Rivers shot friends and family in violent tribal costumes; an ambient drone lends editorial calm.

The film has obvious influences; on a conceptual level if not a textural one, I was reminded of Peter Greenaway’s 1975 short, Water Wrackets. At an aural level, though, Rivers specified three conscious influences: the score from Dreyer’s Vampyr (1932); music from the 1970s sci-fi film Phase IV (1974); and Ilona Halberstadt, who narrates two of the film’s segments, was chosen because of the similarity between her own inimitable accent and that of Lotte Eisner, who narrated Herzog’s Fata Morgana (1969). Slow Action‘s other two segments are narrated by John Wynne, whose American drawl evokes that of structuralist artist Michael Snow, who narrated Hollis Frampton’s (nostalgia) (1974). Together, Halberstadt and Wynne provide the film a kind of “intimate otherness”.

Intimate otherness perfectly describes Two Years at Sea (2011), Rivers’ witty debut feature film, a portrait of real-life hermit Jake Williams, who lives out a self-contained existence in rural Aberdeenshire, an idyll for which he saved by working as a sea merchant for two years. 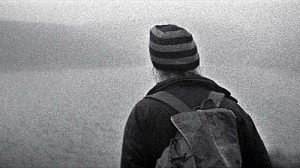 This film sits more comfortably in the nascent tradition of “slow cinema”. Living at a comfortable remove from social commitments, Jake’s solitary existence presents both Rivers and his audience with the narrative challenge of establishing and maintaining interest without the drama and exchanges of conventional daily life. Having worked with Williams – to whom he was introduced through a friend – for the 14-minute 2004 short This Is My Land, Rivers is able to confront his conceptual challenge by placing full trust in his protagonist.

Documenting Jake’s routine in beguiling 16mm, Rivers achieves a fine balance between detailing the intimacies of his subject within a more contemplative framework, with handheld close-ups countered by lengthy passages of real serenity. Rather than try and forge a character before allowing us into the more universal habits of his life, Rivers knows that personality, and even drama, emerges from the daily mundane: far earlier than we might expect, he cuts to an image of Jake showering, dispensing there and then with firstly, any embarrassment for subject or audience, and secondly, any prior assumptions about a hermit’s domestic cleanliness.

The film also extends Rivers’ fascination with self-sustained living. As Jake saws off a tree branch, his grey-white beard an apparent constant in an otherwise varying tableau of images, it isn’t hard to imagine this might be what Santa Claus gets up to for eleven months of the year. After an expository opening third, in which agitated jump-cuts and a necessarily cluttered mise-en-scène are juxtaposed with wider, more considered shots, Jake lies down for a nap.

Rivers frames him from outside his caravan, looking in so that we see Jake, at rest in slumber, visually enveloped by the outside foliage reflected in the window. The natural surroundings no doubt provide a calming presence; but the shot might also point to this way of life having its own pressures and burdens – those that come with having to provide for oneself even when removed from a more immediate city life. (Themes of self-sustainment seem to emerge almost naturally from a more stripped down narrative in which daily minutiae are foregrounded, something that’s surely, to varying degrees, a prerequisite of “slow cinema”.)

What follows is majestic. An empty frame observes that point at which the forest’s canopy meets the sky above, into which ascends Jake’s caravan, which, having provided its owner the means of portably existing away from the world at large, cheekily defies gravity and seeks attention within the frame as soon as we dare to leave it. It’s a breathtaking moment of quiet euphoria that brings to the already personable study a Herzogian edge, expanded upon thereafter with the introduction of mood-enhancing Indian folk music and a long take in which Jake enjoys the simple pleasures of floating across a lake on a man-made raft. Its sustained final shot concludes an extraordinarily textured work.

Two Years at Sea is released theatrically on May 4.