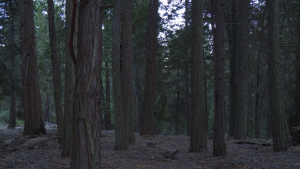 With the swell in recent years of visual artists looking to cinema as an outlet for their expression, combined with an ever-widening range of methods of consumption (portable as well as domestic), the space in which a film is exhibited is becoming more and more flexible and context-dependent. Perhaps keen to keep their chosen medium sacred, some critics might feel justified in faintly damning a film by describing it as more suited to a gallery or an installation space. But what makes American filmmaker James Benning’s latest film Nightfall distinctly cinematic is that for it to mean anything, one has to consume it in its entirety.

Shot in late September, Nightfall is a 97-minute take of a forest situated 8,000 feet high in Sierra Nevada, California. The film presents a deliberately unassuming composition recorded late enough in the day to allow its titular phenomenon to occur within a digestible timeframe.

Since one would never normally watch an actual nightfall with the same focus required of (and somehow attained by) a projected image, Benning’s recording of one makes us aware of it as an inevitable and natural process, encapturing the central thematic paradox of 2012’s AV Festival: that of forward progression at a slow enough pace for progress to be imperceptible.

Watching the film with an audience for only the second time – the first being in Berlin last month – Benning noted in his post-film Q&A that he actually shot the film twice. First time round, he thought his chosen scene was affected too much by the wind and, distracted by a particular branch blowing throughout, decided to shoot it again on a day still enough to ensure as little moved within the frame as possible.

With light as the only visual variable ensured, the film’s extreme minimalism facilitates a strangely intimate communal experience in the confined discipline of the cinema. Its virtual absence of incident allows for one’s mind to wander (and perhaps even one’s eyes, to the surrounding physical space): because of the severity of the film’s set-up – its static framing, its real-time unfolding – one might legitimately find oneself wondering about that outside and beyond the on-screen space, particularly when primed by a new, unseen sound, such as an overhead plane or a distant car, the aural presence of which take on suggestive meanings in the absence of direct visual signification.

Indeed, one audience member noted after the screening that for him it was more of an audio experience, to which Benning responded that he was proud of the field recording. Its importance here is clear: as well as ineluctably documenting the rich sound textures of this natural place, the film signifies through its soundtrack its own kind of three-act structure, beginning with a cacophony of birds before settling into a middle third, whose tranquillity is interrupted by the crescendo of crickets that denote the film’s final phase. Their incessant high-pitched drone intensifies as the image darkens and our eyes search the image for the remaining pockets of light that, at the film’s opening, seemed innocuously placed within the composition.

In a neat twist, Nightfall screened between 4pm and 6pm, during which the Newcastle city centre underwent its own dusk outside. There is something deeply beguiling about the film; as another audience member noted, the contained environment in which it was exhibited demands a bodily stillness that matched that of the image. Responding to whether or not there was a meditative thinking behind his work, Benning – who told a great anecdote about how he once skipped maths class to watch John Cage’s abridged reading of Joyce’s Finnegans Wake – said, “I have anxiety and this calms me down. It’s a reflection not of how I live my life but how I’d like to live my life.” The comment seemed to find a shared agreement in the room.

James Benning also has two works in the AV Festival’s Exhibitions programme. The UK premiere of Milwaukee/Duisburg runs at Middlesbrough’s Platform A Gallery from March 1-31 and the world premiere of One Way Boogie Woogie 2012 runs at Northern Gallery for Contemporary Art, Sunderland, until June 9.