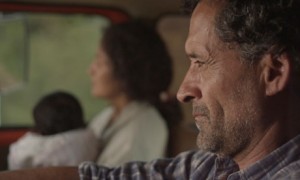 On the one hand, Las Acacias sits comfortably into what we’ve been calling “slow cinema” for the past fortnight or so. All three of the broad, interdependent propositions of the tradition as put forth by Matthew Flanagan seem present here: an undramatic narrative, an emphasis on the unbroken “non-event”, and stillness – in the camera’s set-up or within the frame itself. Sparse on dialogue and incident, the film also seems to embody the AV Festival 2012‘s central thematic tension, that between progress and stasis.

Rubén (Germán de Silva) is an Argentine truck driver who hauls lumber to and from Paraguay. On one such trip – the focus of the film – he agrees to drive Jacinta (Hebe Duarte) and her baby girl Anahí to Buenos Aires, where she intends to live with a cousin. Setting off, the trio endure the arduous drive mostly in silence. Along the way, Anahí charms Rubén with her innocence; during the few stops they agree to, an unsaid connection between chauffeur and passengers develop. When Rubén stops by his sister’s to drop off a belated birthday present, Jacinta leafs through a photo album she finds in the glove compartment, showing her driver with his a son he doesn’t see.

As they near Buenos Aires and stop off for a meal, Jacinta reciprocates conversation with a fellow Paraguayan; we watch Rubén watching them, protective and perhaps even jealous. His ensuing silence is less punitive than self-pitying. In his inward turn, he stirs in his thoughts, remustering an abandoned romance. On a continent where families are separated and dispersed and one’s job removes one from an ordinary social life, life’s opportunities become condensed into the confines of a transport vehicle rumbling its way across national borders to provide capitalism its raw material. 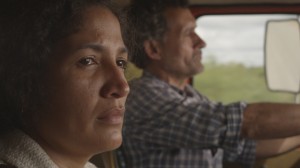 Many of the film’s shots include one of the truck’s wing mirrors, so that we feel the forward movement of the vehicle even if we also see the path left behind it. It’s a fairly obvious motif that’s used simply and effectively. Indeed, neither Jacinta nor Rubén speaks much of their past – or, for that matter, of a future; even when an invitation is put forth on a whim in the film’s closing moments, the enthusiasm with which it is received is debatable.

Instead, both characters remain in the uncertainty of the present – when Jacinta wakes up Rubén when he begins to fall asleep at the wheel, he demands her trust with self-delusion: “I’ve been driving for 30 years, and haven’t fallen asleep.” Through this, all the while, young Anahí remains oblivious of the economic and geographical implications of her journey; her gestures are those of awe and curiosity, reinvigorating new life and purpose into an object as banal as the lid off a drinks flask.

And yet, on the other hand, the film superficially falls shy of “short cinema”. If it’s story is durational for its characters, its narrative is comparatively swift, clocking in under 90 minutes. And though much of the soundtrack is the monotonous drone of the truck’s engine – part of the reason its otherwise cutesy development resists sentimentality – the film’s “emphasis on the unbroken ‘non-event'” relies less on the long take than it does on an even more economical editorial rhythm, managing to cover a 17-hour-plus road journey in simple, unobtrusive shot-reverse shots that don’t so much draw attention to themselves in the arthouse tradition as they foreground the performers.

Directed by Pablo Giorgelli – who won the Camera d’Or, the prize for best directorial debut, at Cannes last year – de Silva and Duarte are equally compelling. Duarte embodies a hardened single mother with a certain mystery, while de Silva gives a lesson in something resembling the contemplative intensity of a 1990s De Niro. But perhaps the final word should go to Nayra Calle Mamani, the young baby whose presence, as Anahí, wins over Rubén to latent fancies and the audience to endearment.