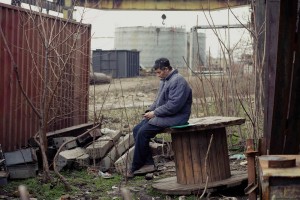 A long film about killing, Aurora (2010) is Romanian writer-director Cristi Puiu’s second entry in a planned series of six, dealing with stories set in Bucharest. Following 2005’s masterpiece The Death of Mr. Lazarescu, Aurora continues its predecessor’s restrained aesthetic, tracing father-of-two divorcé Viorel (played by Puiu himself) to a fault, never leaving him from start to finish over the course of two days.

But whereas Lazarescu had at its centre a character increasingly unable to talk for himself, his fate left to the conversational standoffs between the paramedic who takes charge of him and the more qualified medical staff to whom he is just another patient, this work’s protagonist actively minimalises social interaction to such an extent that the film’s dialogue might amount to a few pages.

Because of its ceaseless subjectivity, the film is far narrower in its scope, lacking exposition to the point that the significance of the few major incidents that occur during the film, or that of Viorel’s relationships with various periphery characters, are left to suggestion until the very end. As if to heighten the frustration of a suspended exposition, throughout the film, the camera is free to follow Viorel from one domestic space to another only with pans and tilts: the tripod on which it sits is stubbornly immobile.

This spatial contradiction – the semi-loose handling of an otherwise fixed camera – is teasing, and provides the film with its effective tension between stasis and movement. Our part in proceedings is that of an intrigued but ultimately helpless observer: the quiet solitude of Viorel is disquieting – even when his physical mobility seems to put him at an advantage over the restricted camera, moving beyond earshot for instance to talk to a colleague, some unvoiced inner torment is clear. He seems able to command the frame only when indoors – exterior shots are few, and he always looks uncomfortable in them, scurrying awkwardly through or out of frame.

After an early scene involving the Red Riding Hood fairytale that hints towards a dry, deadpan comedy, however, the intrigue-helpless gradient soon lends itself to ambivalence, even apathy. Lush depictions of a Bucharest dawn, lit by cold streetlamps and soundtracked by distant dogs barking agitatedly (as the opening of Corneliu Porumboiu’s 12:08 East of Bucharest and much of his Police, Adjective showed, Romanian cinema is at present unmatched at such tonal scene-setting), are too-brief preludes to the lengthy, wordless scenes that follow: we are provided so little information about Viorel’s life that his own apparent listlessness risks rubbing off a little on the audience. 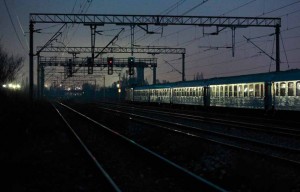 Puiu introduces new information at crucial moments, though, and accumulates it with a subtle naturalism that sustains interest. Rather than accounting, psychologically or otherwise, for a murder by depicting the few hours inevitably leading up to it, Aurora’s killings begin earlier than you might expect, which shifts the film in significant ways. Murder punctuates the film twice more literally, but hovers over every scene following that extraordinary moment midway through, when Viorel fires his 12 gauge shotgun and instantly kills two seemingly random people in a hotel car park.

After these killings, does Viorel’s behaviour change, or do our perceptions of him? With the aesthetic unaffected – the narrative is marked throughout by a deliberate pace and abrupt ellipses – it is probably a bit of both: of course we now know for certain that he is capable of brutal violence, but Viorel does seem markedly more irritable in the scenes following his killings.

Though starring in one’s own film always risks charges of self-indulgence, Puiu – who cast himself after fruitlessly searching for leads for 5 months – lends his protagonist an unassuming ordinariness, even when his breathing visibly changes as he absorbs gibes from someone cutting potatoes with a temptingly sharp knife. In the latter stages of the film, his contained menace edges into moments of dark comedy, first when he throws an impatient glance to a shop assistant who is understandably keen to see him out, and second when he stares out his 7-year-old daughter’s classmate: “What are you staring at?” he asks her blankly.

It isn’t until the final shot that things are explained. That this shot – a lengthy take that recalls the climactic battle of reason and semantics that ended Police, Adjective – happens to be the wordiest and busiest of the film by far might be a sign of Puiu seeking some kind of obligatory wrap-up. But as it stands, without it, the film as a whole wouldn’t make sense, and with it, the meaning and significance of previous scenes are retroactively changed. Less a twist than a logical conclusion to the film’s underlying humanism, Aurora’s final scene rewards its maker’s gamble and its viewer’s patience.