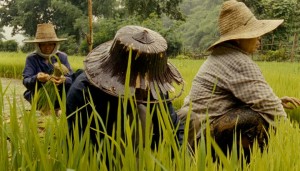 As the unobtrusive statement it takes as its title might suggest, Lung Neaw Visits His Neighbours (2011) makes a virtue of minimalist simplicity, its makers content to observe the routines of their chosen protagonist without imparting much in the way of a constructed plot, preferring instead to observe his daily comings and goings. As such, the film is non-intervening to a fault.

Contemporary Thai artist Rirkrit Tiravanija returns with this debut feature film to the recurrent subject of previous works, namely the elderly farmer Lung Neaw, a native of a village near Chiang Mai, the largest city in northern Thailand, whereto the director moved in 2005. Most notably, Lung Neaw previously appeared in Rirkrit’s eight-hour installation piece titled “Lung Neaw” that exhibited in London in 2010. At 149 minutes, this is a slimmer work containing more incident, as Rirkrit and fellow-cinematographer Christian Manzutto (also the film’s co-producer) capture Lung Neaw, in staggering 16mm, over the course of seasonal changes.

Visually, the work is astonishing. Early scenes depicting Lung Neaw at an evening market are immediately impressive in their tonal range, and the dense greens and rich golds that saturate much of the film’s exteriors are genuinely fascinating. Interestingly, occasions of blue percolate the frame, and the emphasis on them seems to associate the colour with the manufactured as opposed to the natural, from the striking blue denim jeans worn by Lung Neaw to the plastic cups in which drinks are served, or from the incongruity of trucks gracing the frame to the artificial lighting of market interiors.

If Rirkrit’s visual flair continues a tradition for which he has won much acclaim as an artist, however, he has also made a work here that begs legitimate questions as to the point at which an artist with editorial free rein falls into self-indulgence. As we view Lung Neaw sleep in the afternoon, bathe in rivers, smoke, prey, catch food, eat, wander, meander and chat to his neighbours, we can’t help but ask to what end the filmmakers have seemingly matched their subject’s leisurely rhythms with such an unwieldy canvas and lethargic progression.

No doubt aware of the strength of their images, and possibly precious over their footage shot, the film’s makers seem to have been reluctant to spare us any details of Lung Neaw’s life, holding images long past the point of digestion. While Rirkrit seems conscious enough of feature duration constraints, he (along with Manzutto, the film’s credited editor) appears unpracticed in the selection process that comprises editing. As a result, a trick seems to have been missed: had the film lasted around or less than, say, 70 minutes, its charms and beauties would have been kept from outstaying their welcome. 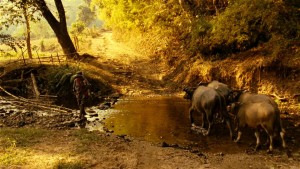 Lung Neaw Visits His Neighbours doesn’t demand or reward the communal discipline of the cinema in the same way that some other films at the AV Festival did, precisely because it seems less conceptually cohesive, or, to paraphrase Ben Rivers from the Slow Cinema Weekend’s panel discussion, its form doesn’t appear to have been demanded by its subject, but instead has been imposed upon it.