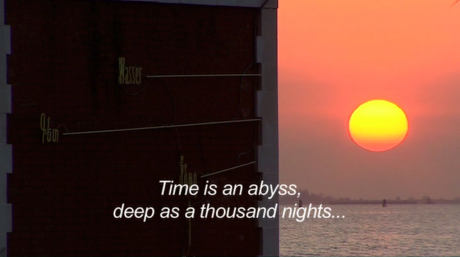 Opening with Rex Harrison’s lament in Joseph Mankiewicz’s The Honey Pot (1967) that the overriding means of valuing life is by its length and not its quality, Fergus Daly and Katherine Waugh’s 2009 documentary The Art of Time examines how leading contemporary artists are responding to and utilising ever-changing perceptions of time in their work.

Though aspiring to an essay film, The Art of Time allows equal footing to its interviewees, brought together here as a collage so that the film deliberately lacks the singular voice that distinguishes one of its makers’ influences, Chris Marker.

The documentary itself is the result of a lengthy project intended to be, as Katherine Waugh noted when introducing it to a packed screening at Newcastle’s Tyneside Cinema, “investigative of temporalities”. Though a 20-hour version apparently exists, the film has been considerably shortened due to funding procedures, which is probably for the better, given that it’s difficult to see how more material would inherently provide more fascination without becoming itself something of an endurance test: the film’s makers do well to work within the familiar terrain of talking heads, developing the film’s narrative by means of themed chapters that lend it its sense of structural logic.

Choosing as its starting point the Proustian notions of voluntary and involuntary memory and the implications of both for artistic explorations of the temporal, and moving towards its logical conclusion dealing with the future – though as the film teaches us along the way, the future as a concept is becoming increasingly blurred with that of the present – the film is a mostly well-measured succession of interviews with the likes of Vito Acconci, Robert Wilson, Doug Aitken, David Claerbout, Stan Douglas, the Quay Brothers, Chantal Akerman and Alexander Sokurov, among others.

Because Daly and Waugh have eliminated themselves from their own work – the procedural opposite of, say, Claude Lanzmann, whose absence from the episode dealing with trauma and, specifically, the Holocaust’s relationship to time, memory and visual representation, is a little odd – they’ve done well to form a semi-coherent narrative from an obvious wealth of material, much of which presumably gave conflicting and contrasting views.

Though a kind of eclecticism was embraced, the film is editorially stitched together so that, for the most part, interviewees compliment one another, if not explicitly then by their mere juxtaposition with one another. Waugh says the film isn’t meant to be sentimentally negative regarding notions of modern life becoming too fast to appreciate its finer fruits; as Acconci says at one point, for instance, it has become harder to read at length than it once was, though not necessarily in a bad way – the trick is in finding new ways to read. 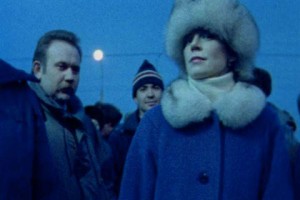 This said, there is at the very least a tacit, gradual tendency towards something resembling apprehension – Akerman says near the end that she doesn’t want to say “the end of the world”, but that she is “worried” about how fast the world is becoming (or, implicitly, how fast it seems to be hurtling towards its end). Despite intentions against it, such intellectual helplessness seeps through the work overall, as its interviewees give way to banal observations and epigrammatic abstractions. To the former camp belongs Russian filmmaker Alexander Sokurov, who claims to have discovered (!), during the making of Russian Ark, that space and time are inseparable; Sokurov also tells us that “reality is not reality – it is made”. What are we supposed to make of these observations?

Such abstractions come as no surprise upon learning Waugh and Daly have a background in philosophy. Combined with the expertise and viewpoints of their subjects, the film lends itself too easily to the abstract-universal (a figure such as Paul Morley counters this with refreshing, more grounded historical insight regarding ’90s rave music and the political implications of its repeated time).

Artists of course have a responsibility to both the world and their conscious response to it – their art. As such, the documentary is most illuminating when its interviewees are limited to explaining their own thought- or working process; it’s when probed or allowed an outlet for wider observations that their own artistic and even philosophical limits are exposed. One dominant concern in the film is not that life has become too fast, but that it is irretrievably so.

What the film lacks is a rational, materialist viewpoint that might counter the more vague abstractions. (Tellingly, architect Peter Eisenman explains that his Memorial to the Murdered Jews of Europe in Berlin is “a warning against rationality”.) Changing perceptions of time and the speeds with which we live our lives are themselves grounded in a materiality. Waugh and Daly’s film would have been strengthened – perhaps with their own intervention – by asking to what extent people’s sense of time is determined by their material, working lives.

A fight against an apparently irretrievable descent into passive consumerism and a fight for one’s fifteen minutes of fame (to ensure immortality against death), two by-products of a faster world, would surely be linked to the fight against an economic system demanding more and more of our leisure time from us. How, for instance, are the temporal phenomena illustrated in the film experienced by ordinary working people? To situate itself within this more concrete struggle, the film would have had to probe deeper into the social and historical contexts in which its artists work and to include in its cast figures outside of such circles.