Beats of the Antonov Review 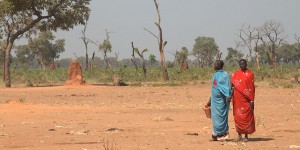 Beats of the Antonov, a Sudanese/South African co-production that looks into the redemptive power of music, makes a noble attempt to explore the positives behind an utterly bleak situation. Amidst the ongoing Sudanese civil war, Hajooj Kuka explores how widely and freely the Sudanese musical tradition has grown and mutated.  its role as an form of entertainment and a folk storytelling tradition, as well as a personal coping mechanism and collective communal bond against the tirade of hatred, suffering and violence bestowed upon Sudanese nationals.

Kuka’s film opens idiosyncratically. Footage of a bombing raid is bridged pointedly with rounds of laughter. In Sudan, a nation that has been in a near constant state of war since its independence, we’re told by an anonymous, introductory voice that “despite the catastrophe, people laugh because they realise they are not hurt, laughter is like a new birth.” It’s a fitting introduction to Beats of the Antonov, a film about finding positives amidst overwhelming misery, and unearthing voices generally ignored or silenced.

Splicing interviews and musical performances (and sporadic, jarring pockets of interjected violence) Kuka explores how music prevails as one of the strongest methods of continuing folk tradition, providing continuity and stability in a country otherwise obliterated by unpredictability. Music proves itself to be both a means of personal expression and shared storytelling, as well as a way of passing on a continuing identity through generations. Contributions from Sudanese musicologists are interesting, if slightly antithetically academic when compared with the informal style of the rest of film.

Indeed, Kuka seems to struggle to find a suitable style to represent her broad subjects and often conflicting material. Whilst mostly calm, focused and observational, periodically the film veers into sections of rough, aimlessly gyrating camerawork strung together through haphazard editing. This is sometimes purposeful – a midway switch to a prolonged sequence made of direct battle footage, bullets zipping and camera pov darting wildy amidst real danger, is pointedly jarring, and illustrates well how quickly the atmosphere can change in Sudan, drums to bullets in a cut – but also partially the effect of inexperienced operators.

Kuka, in this ambling, empathetic portrait, has an ambitious reach. Looking, in a mere sixty eight minutes, to tie the wider war situation with the culture of the music, she is not entirely successful. However one point is well made, showing how the bonds made through musical connections, generational and immediate, act as a defense against the North Sudanese attempts to divide on racial grounds, the persecuted drawing upon a kind of cultural power, the only type of arms they have.

Above all, what comes across in this brief but pleasing documentary, is the resilience and strength of the spirit of these people, despite immediate, continual suffering. The music in the film is all extremely infectious, well implemented and well recorded, and anyone with an appreciation of music can see its various values, (restorative, uplifting, relaxing etc.) but Kuka does well to demonstrate quite how important it can become when all else has been desecrated. As an early contributor stresses early on, in Sudan, music has become a source of life – as vital and necessary as “air, water and food.”

The film, which won the People’s Choice documentary award at Toronto International Film Festival, may seem a little slight on reflection and clumsily assembled in the moment, but it’s hard to find fault in the value of some of the contributor’s offerings or in the dignity Hajooj Kuka affords them through her time and portraiture.