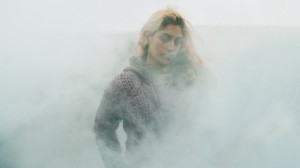 Daniel Wolfe lifts liberally from his most successful modern peers in the Brit social realist genre in his first feature Catch Me Daddy, but seems to miss the key components of the best films of this type: character and heart.  What would the films of Andrea Arnold, Lynne Ramsey and Clio Bernard be without the well realised (and more importantly empathetic) individuals at their centre? Wolfe channels the suffering that is inherent to these films about underprivileged communities facing difficult situations, but the all-important meaning behind them eludes him.

Using Arnold’s regular cinematographer Robbie Ryan for this vivid and pictorial, but ultimately dispassionate film, Wolfe opens his film in stunning, if familiar, territory. As Ryan’s 35mm camera scans the drearily beautiful West Yorkshire Moors, a thickly accented voices reads aloud a Ted Hughes poem, as in the opening to Clio Barnard’s recent film The Selfish Giant. As Barnard had used Oscar Wilde’s words and Britain’s rural terrain to set in motion a modern myth, here Ted Hughes prefaces a film wherein the land looms as large as the people who inhabit it. “The valleys went out. The moorlands broke loose,” reads Laila, (the impressive non-professional first timer Sameena Jabeen Ahmed) setting up ominously the dark turns that will follow.

With Catch Me Daddy, a thriller about Pakistani-British honour killings, Wolfe has stated that he aimed to create a modern day western. It’s perhaps fitting then that the topography of his setting should play such a large role, the Yorkshire Moors here serving as a vast impenetrable frontier, and the unidentified urban areas between it as connecting, equally hazardous outposts. As Laila and white boyfriend Aaron, (Conor McCarron) hide out from Laila’s disapproving family, it is the sparseness of the Moors that first accommodates them – as we find them hiding out in a campervan amidst the wilderness.

It is not long however, until this peace is interrupted, initiating a shift towards the brutal that Wolfe sustains through to a truly grim and unforgiving close. Having worked hand in hand with white racist job-men Barry (menacing newcomer Barry Nunney) and Tony (veteran thug Gary Lewis), Leila’s family eventually catch up to her. After a forceful extradition attempt gone awry, Wolfe initiates a messy, violent chase narrative as Aaron and Leila face off against their captors, and here the film begins to unwind. The two groups, split across racial grounds, but unified by a shared bounty-lust, battle against each other as much as their prey.  In Wolfe’s pessimistically equalising vision, each side is as contemptible and pathetic as the other. Laila’s family are slave to a maniacal, overbearing father figure; and Barry and Tony to their greed, racism and idiocy.

In the best moments, Catch Me Daddy offers some genuinely captivating images. Robbie Ryan’s luscious and varied 35mm cinematography is as good as it has ever been, and Wolfe orchestrates this talent well. (“Do what you did with Andrea Arnold for Wuthering Heights again, please? Thanks.”) At peak, Wolfe’s pop video credentials (having made a number of videos for Plan B, as well a Jake Gyllenhaal starring viral hit for French duo The Shoes) shine through as he unites sound with image, conjuring energy and beauty out of the general dreariness of the setting. In the very best scene, intoxicated on a cocktail of drugs, Laila dances euphorically to Patti Smith’s ‘Horses,’ gyrating clumsily but wonderfully around the couple’s disheveled caravan retreat.

Unfortunately, Wolfe has not yet successfully made the whole jump from music video to features. As comfortable as the director is in guiding the visual side of things, as the film progresses he focuses on stringing together high-intensity chase scenes, but ignoring largely what gives tension its impact, a sense of care for the characters at risk. The lackluster script, co-authored by Daniel Wolfe and composer brother Matthew, skips essential character development in favour of thrills. Strong on visual detail, Catch Me Daddy reveals its shortcomings when characters open their mouths.

Though he works a good performance from his young lead Sameena, her character isn’t exactly well developed – there isn’t enough time spent pre-collapse for that. By the end, Laila is reduced to a Joan of Arc style puppet of suffering, worn down and voiceless, emotionally and physically devastated and, avoiding specifics, all but abandoned by a needlessly desolate denouement. Emulating the worst of two sensibilities, Wolfe takes British social realist cinema’s problematic habit of making spectacle out of poverty, and matches it with early 2000s European art film’s vulgar penchant for the shallow aestheticising of violence – resulting in one morbid, off-putting, end product.

There is evident care for the artistic side of things here, with plenty of compelling imagery and a number of dramatic, vicious set pieces, but a disquieting lack of insight into the human angle. Why exactly does a white British director feel qualified to comment on the intricacies of Pakistani familial life, let alone something as sensitive and easily misunderstood as the topic of honour killings? Overlooking this even, are such matters really ‘action-thriller’ material, or do they deserve a little more serious treatment, perhaps from a source with more direct experience? Wolfe doesn’t appear to have even considered these questions properly, announcing in interview that the film was “based on a newspaper story he’d read”. In his next feature, a little more compassion will go a long way for a director who is evidently already a capable imagemaker.