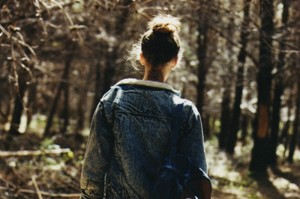 “I didn’t know it was a devil town. oh lord it really brings me down.”

Leones, the first film from Argentinian Jazmin Lopez, would be a run of the mill entry into the loosely defined aloof-teen-walk-and-talk genre, were it not elevated by two tricks, one formal and one narrative. The formal one, the employment of a floating, tracking steadicam as a character in itself, is obvious to the observer. The narrative one though, is revealed ambiguously enough that it could be missed entirely.

Leones, explained without spoilers, roughly constitutes 90 minutes of footage of five teens walking through a forest, shot lushly from behind with a trailing, voyeuristic camera, talking about odd matters, and playing a Hemingway inspired linguistic game whereby the player must create a six word story, a lifetime in only a few words. “For sale. Baby shoes. Never worn,” being the suitably haunting example given. There is a little more to it however, mysterious lines of dialogues, a spooky cassette recording,  surrealistic, unexplainable scenes (a game of air volleyball that clumsily mimics the mime scene in Antonioni’s Blow Up for one) eventually reveal themselves to be purposeful as Lopez unveils her narrative caveat, a sort of supernatural element  that informs the aesthetic.

This style – that second trick – is certainly the most interesting aspect of Leones. Making her inspiration clear, Lopez employs the camera-operator crew of Gus Van Sant’s Gerry, a forbearer in the contemplative walk-and-talk genre, and upgrades them (Matias Mesa) to director of photography. She also, in a way, upgrades the status of the camera itself, to that of the rank of sixth character.

Often in film, especially that with realist tendencies, the aim is to make the camera’s presence as unnoticeable as possible, but in Leones the omniscience of the camera is made especially visible. It is a truism that the camera has to be in sight of the characters for the action to be observed and heard, thus the camera is generally tied to the movements of the characters of a film. In Leones, the camera is an agent of its own initiative. The spectrely camera follows behind the walking characters as expected for much of the film, but every so often will leave them behind, pause as they walk on to focus on the landscape, track and float absent mindedly around the forest canopys, or circle a house or car inquisitively. Fantastic, eerie sound design and the beguiling dreariness of the 35mm film grain make these wanderings some of the most diverting and satisfying moments in Leones.

It sounds pointless, the camera must surely serve the narrative purpose and stay with the characters by which the narrative is progressed, but in Lopez’s film, this style of non-presence is fitting, the camera’s ghostliness is very apt. Mesa’s camera floats and bobs about as if of its own will, suggesting heavily a sense of higher observation, a voyeuristic judgement that is entirely relevant to Lopez’s supernatural/spiritual themes. The style is befitting of the content, applying a melancholic, mysterious air to proceedings long before any reasoning as to why this might be necessary is uncovered. The shortcomings of Lopez’s film in other regards, characterisation, writing, become more forgiveable if this formal innovation is agreeable.

Slow, pronounced, and more than a little enigmatic, Jazmin Lopez’ first feature is valuable mostly for its formal elegance. It seems to be a film that would surrender more on repeat viewings, the foreknowledge of the hidden-but-crucial plot element perhaps making some of the more abstract moments seem relevant, and the character’s behaviours more emotionally resonant.