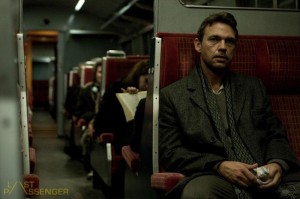 Speed, destination and time – it’s no wonder why trains have racked up a certain allure when it comes to a filming location. From the Lumière brothers, early 20th century cinema to today’s releases, films set in, on or around trains have always had a certain magnetism. Whether it is to draw out an innate terror within the audience or to maximise a romantic atmosphere, the train is where our thoughts and fears run free and time stands still. The fact of the matter is, for our modern day commuter, occasional traveller, non-driver or backpacker the train is not only a useful means of  transport but also an ethereal setting and thus perfect for stories to be told. In Last Passenger, we witness what people will do under pressure to survive when normality takes a dark turn. This brilliant indie thriller centres on a hijacking which threatens Lewis Shaler (Dougray Scott), his new love, son and fellow passengers. To celebrate the release of Last Passenger we will be taking a look at other films that have used the train as a setting to tell their stories.

While on their usual route, Lewis Shaler starts to notice something wrong with their driver and the train that he, his son and a handful of other passengers are on. The passengers report these happenings to no avail and soon realise that the driver has a different destination in mind. This forces them to utilise their limited resources to get off this hijacked train.

Set in the future, the Snowpiercer is a huge train powered by a perpetual motion engine, whose passengers are the only survivors following the world succumbing to an ice age. As time goes on, a class system automatically develops upon the Snowpiercer with the upper class occupying the front and the lower class occupying the back. That is, until the latter decide to revolt.

Playing upon the idea of speed and uncontrollability, Unstoppable portrays the train as a vehicle for disaster as a train carrying hazardous chemicals heads for the hometown of Will, a train operator, and his family. This leads to an action packed 98 minutes following Will, Frank, a veteran engineer and Connie, a corporate employee trying to catch up with the rogue train while being discouraged by the head of their company.

This horror film uses the train as a means of exploring the idea of being taken away from safety and the known. As a college wrestling team tour Eastern Europe, they are misled onto a train where they are each taken and tortured. But will they find out why before it’s too late?

Based upon a novel by Morton Freedgood and a remake of the 1974 film adaptation of the same name, The Taking of Pelham 123is a thriller centred on the hijacking of a New York subway train. With a cunning mastermind behind the hijacking, Ryder played by John Travolta, and a team of 4 armed men demand ten million dollars or the lives of the innocent passengers will be taken, one by one.

As the title suggests, this film is set on the popular travelling destination of the Trans-Siberian Railway. As an American couple befriend another couple on their journey to Moscow from Beijing, their suspicions are soon stirred as a whole background of crime and drugs are revealed.

Sibling relationships have always been difficult however it seems that the only thing that can bring these three brothers together is a train ride throughout India. Prompted by their father’s death, these three brothers embark on this unfortunate yet enlightening journey that soon sparks sincerity, empathy and change.

Utilising the train’s fantastical element, The Polar Express picks up a young boy, Billy, on Christmas Eve to cement his belief of Father Christmas. Transporting Billy and a band of other lucky children to the North Pole, The Polar Express exudes magic, miracles and self discovery.

Death, Deceit and Destiny Aboard the Orient Express (2000)

Themes of luxury, terrorism and crime play a major part in this film as an anonymous benefactor invites a band of celebrities and business moguls upon the Orient Express, only for it to be hijacked by terrorists and explosives. As the train races through the European countries between Paris and Istanbul, the passengers manically decide what to do when suspicions and peculiar happenings begin to arise.

LAST PASSENGER is available on DVD and Blu-ray from 27th January 2014.