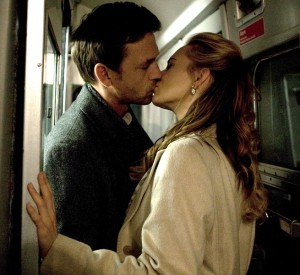 Omid Nooshin’s Last Passenger made news earlier this year after he made a 90 second trailer at the cost of £500 for a film that didn’t exist, yet when investors suddenly became interested in the project and the cast came on board, the film was realised and made. Finally released, Nooshin’s Last Passenger takes notice of all crime thriller that came before it; with a hint of Hitchcock and the tension of an Agatha Christie, Last Passenger is a well crafted mystery that keeps audiences literally on the edge of their seats until the very last moment.

Starring Dougray Scott and Kara Tointon as the main protagonists alongside Iddo Goldberg, David Schofield, Lindsay Duncan and introducing Joshua Kaynama; this is a traditional, exciting locked in mystery where the characters have no way of escaping until the bitter and explosive ending.

Scott plays Lewis, a doctor on the way back home with his son, Max (Kaynama) when his hospital calls asking for him to come into work. He explains that he’ll be home soon, will drop off his son and come in. The opening moments of the film explain to the audience rather quickly that this is going to be a tense and frightening experience through two separate incidents; the first is the argument that the shifty looking Jan (Goldberg) has with a train conductor about having a smoke, their argument is seen by all in the carriage and threatens to quickly turn violent. The film is quickly indicating that Jan may be someone to keep an eye on throughout the film. The second incident is when Max is playing with his toy dinosaur on the train door, which quickly swings open and he falls forward, only being saved by his father who scolds him for playing around where he shouldn’t be.

Whilst this slight macabre is going on, Tointon, who plays Sarah has made herself comfortable in the carriage and instantly eyes up the dark haired doctor. 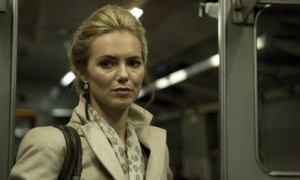 There is no subtly and Max understands exactly what is going on; through some slightly heavy handed dialogue he explains his mother is dead and a few minutes later Sarah writes her number of Lewis’ hand. This first part of the film is a simple enough set up, plotting the characters on the train and waiting for the main event to take place. It isn’t until a few stops later and Lewis quickly wakes to find that the train has emptied out and there only remains a few people; he briefly eyes up a mystery man with a bike helmet but thinks no more on it. When the train goes straight past his station without stopping, his suspicion and worry starts to prick up and when the train doesn’t stop at any of the remaining stops, the rest of the passengers start to worry.

The premise is simple enough, someone has hi-jacked the train and doesn’t intend to stop until he is forced to. That leaves the few remaining passengers to work out what is going on and why this is happening to them. Enter the last of our characters; Peter (a moody, by the book bastard played by Schofield) and Elaine (Duncan). Together the group intends to get to safety, but not before a series of incidents occur including Elaine’s heart attack, Peter’s many arguments, crashing right through a crossing and smashing up a car. Of course all the while, Sarah has quickly become upgraded to Max’s babysitter whilst catching glimpses every so often with Lewis. 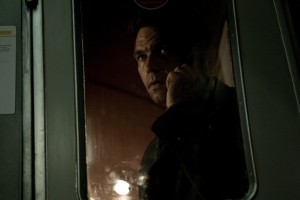 Once all the characters have all been introduced and the issue of what to do it finally noticed, Nooshin’s film accelerates twofold and the audience are watching a simple yet rather brilliant thriller fold out in front of them. As the train speeds up, as does the story itself and therefore the worry from all the characters involved. They come up with various plans to unmask the driver, to attack him and ensure they gain control again of the train but the driver’s weapon comes in something so simple yet so wholly clever; a loud siren. When they try to get into the drivers area, he plays the siren, which physically deafens the characters and stops them in their tracks – the same happens for the audience, who suddenly stop and are made uncomfortable by the noise, this both confuses and alienates the audience, aligning them with the characters.

It isn’t until they come up with an idea to detach the front of the train from the end, that they seem to have any success. The sequence is expertly choreographed, with flourishes that are reminiscent of the Oceans films. This leads all the way up to the main explosion at the ending, which is quite clearly the effect most of the film’s budget went on.

Whilst Last Passenger does very little to add to the thriller canon, it is one of the most exciting and exhilarating action films to have come out of Britain in years, proving that a low budget and good ideas can amount to a real edge of your seat thriller.