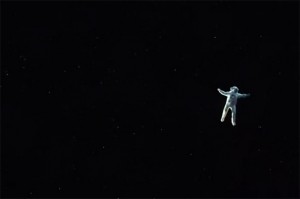 Freshly minted with most of the technical Oscars going, and a Best Director win for Alfonso Cuaron, too, Gravity’s Blu-Ray release is perfectly timed for audience to work out whether it is deserving of all the praise it has had heaped upon it. The answer is mostly yes.

Technically, Gravity is an astonishing achievement, a visually breath-taking trip into space that chooses long, measured takes that allow you to bask in the beauty of earth and space instead of the fast cutting that is usually preferred by Blockbuster directors. It’s almost a game of how long the editor can hold on before cutting away, and the result is a far more immersive experience than the more frantic, ADD editing of Hollywood. Such long takes are to be expected from a languorous arthouse film, but here they are employed to depict an exciting, action-packed thriller that dares critics into rollercoaster-based clichés.

Sandra Bullock and George Clooney, cast off into the nothingness of space, have to fight decreasing oxygen, imprecise movement and bullet-paced debris that has an incredibly destructive impact on space stations and shuttles. It’s a fight for survival unlike anything you’ve seen before, with some of the most spectacular sequences of last year that – thankfully – don’t lose much impact on a decent sized TV or on Blu-Ray. Get this in the highest definition you can. As a survival thriller set in space, this is as exciting as it gets, and at only 90 minutes long, it’s also refreshingly flab-free, the leanness contributing to the escalating tension. In a world where everything needs an origin story and at least half an hour’s set up, Gravity throws you straight into the action and benefits hugely from it. From start to finish, you are guaranteed not to be bored.

It’s not, as some may have you believe, a perfect film however. Hyperbole abounded upon the film’s cinematic release, arguably as a response to just how different Gravity was to the glut of bloated, boring Blockbusters regularly churned out of the studio system. Just because it does most things right, however, doesn’t mean everyone should launch into declarations of ‘Film of the Decade’ or even throw about meaningless phrases like ‘masterpiece.’ The fact remains that the script is painfully trite, with the backstory spelled out in capital letters to the point of being perfunctory. Beyond her being a human, it’s difficult to care about Sandra Bullock’s Ryan Stone because she feels so much like a character that only exists in films, or a mere symbol round which the Cuarons can build their often painfully obvious imagery. Not only that but the score – which is actually excellent – is played far too loudly in the mix, becoming egregiously invasive; it’s an odd choice for a film that champions the silence of space.

Extras: Surely the best reason to invest in the Gravity Blu-Ray is to find out how they made it, and the extras don’t skimp on the details. Fascinating tidbits revealed include that every visor in the film is CGI and that the lighting and camera movements were performed by robots. The chat about the screenplay is a little trite though – telling us what the themes are is a redundant exercise in a film when they are so obvious anyway. Includes Jonas Cuaron’s short film about that radio transmission near the end and a documentary about rubbish in space. Overall, an essential insight into the most technically complicated film of the year, and will leave you in awe of the craftsmen behind it.