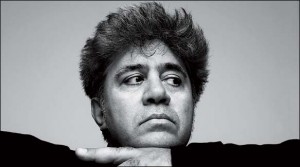 Spain’s most prolific filmmaker and one of the first directors to enter popular cinema as openly gay, Pedro Almodóvar has returned to his original form of comedy with I’m so Excited!, a genre he perfected in the ‘80s with films such as Women on the Verge of a Nervous Breakdown. During recent years his films have stayed on the serious side, with provocative and absorbing releases such as The Skin I Live In and Broken Embraces, starring Antonio Banderas and Penelope Cruz respectively. I’m so Excited is a fun fuelled romp set almost entirely on an aeroplane, (a prime location for comedy if one recalls the genius of Airplane!) The plane has a technical fault and potential disaster is looming. The obvious answer to this worrying solution for those on board is to distract themselves with sex, drugs and booze. In one hilarious scene, three outrageously camp air hosts dance to the Pointer Sister’s ‘I’m so Excited’ in an attempt to calm the passengers.

Front Row Reviews enjoyed attending a satellite audience Q and A with Almodóvar at the Cornerhouse cinema in Manchester. He discussed returning to comedy, the drugs he enjoyed back in the chaotic ’80s, and how honoured he is to work with Spain’s greatest actors. Read our review of I’m so Excited! here.

It’s been a long time since you made what we could call a pure comedy. Tell us about the journey back to comedy now, twenty something years later. 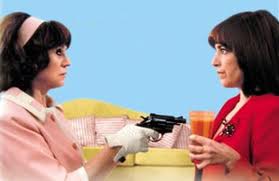 Women on the Verge of a Nervous Breakdown

I started in the eighties making crazy comedies. In Madrid the people really wanted me to go back to the comedy era, they would say “I loved your latest movies but you used to make us laugh so much!” and I would feel really embarrassed. It’s as if I were a butcher and they were saying “there was a meat you had in the past and I really liked that and could you get that back in again”. I can’t simply go back to a comedy because I know I can make a comedy. I need an idea. The idea for this film I had about five years ago, when I started taking notes. I write more like a novelist than a screen writer. I have one idea and take a lot of notes. I have many stories going on at the same time. On my desk I have at least five different stories and one of them will be the next one.

The film has a lot of the spirit from those early films from the early 1980s, it’s a return to form. You’ve changed, and Madrid has changed.

(Almodovar points to his belly and comments how that has changed. Then later comments on having the right posture to hide his belly.) Everything has changed. The war changed Spain a lot. I try to situate myself in the same mood to when I was writing my earlier movies in the 80s. I tried just to connect with that tone. It’s a tribute to the decade of the 80s, which was very important for the Spanish people. It was the decade of my career and of democracy. The situation now is much worse than it was then. In the movie there is the type of behaviour that I was very familiar with back then. Mescaline and Venetia cocktail was a very hot combination and was wonderful at that time. It would make you socialise and talk with everyone, everyone became interesting and were never dull. The moment of sex was very stimulating also. I don’t know how the market is now, I abandoned that a long time ago!

One of the things that is so wonderful about the film is the dynamic between the characters. You have a wonderful cast in the film. I was especially struck by Javier Camera who has been in Talk to Her and Bad Education, in very different roles. Did you have him in mind for the role?

In this case yes, but not with Bad Education or Talk to Her.It isn’t usual that I write about thinking about a specific actor. In this case, there were only two characters I have with actors in my mind, one was Javier Camera and the other Lola Dueñas, who played the physic who desperately wants to lose her virginity. She is an actress that I know. She played one of the more difficult characters in the movie. It is difficult to capture both aspects of the character, on the one hand she is a physic and can hear and feel things, but she’s also a virgin. But Lola knows how to do that and she’s a really great comedian, she really believes in what she is doing. It’s fantastic to have someone who really believes and behaves like the character. 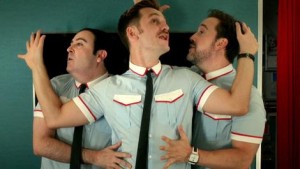 80% of the film is set on a plane. What is the best flight you’ve ever been on and was that an influence in the film?

Fortunately, pretty much all the flights I’ve been on have been boring. When one takes a flight there are two fantasies that are opposite but there are both there. Death and sex, two elements that are important in this film. As a passenger I’m not very entertaining. I don’t like to talk on planes. On the contrary, I’m in a position on a plane when I can concentrate pretty easily. A lot of ideas come to me on planes and I work through them on planes. It’s about not being in a particular place, I’m not in a place nor in a concrete time. It gives me a concentration that I would really like to have in my study or indeed here. It’s also the same with cars, the idea of motion, of moving. It also generates ideas, good or bad I don’t know, but it activates me mentally.

How long did you rehearse for?

About 3 months. It is the first time that I shot in such a small place with so many characters. I rehearsed the whole thing in my office, almost like a choreographer. I choreographed everything; the dialogue, the rhythm. 80% of the actors depends on the way they talk and with the temper that they talk. I had that very clear before going to the location. It is almost like a theatre play, so it was very convenient to rehearse.

I just wondered if you could talk about the amazing Pointer Sisters scene. How did that come about? What inspired that to suddenly happen?

I wanted to have a song in the movie. I didn’t know exactly what song but when I finished the script I sent it to the international distributor I wanted a song that has a good English translation. ‘I’m so Excited’ is perfect because it captures the spirit of these passengers. I wanted a disco song for many reasons. It was the type of the music suited to the three stewards because, if you didn’t notice, they are obviously gay and flamboyant. This song meant a lot to them. I didn’t want to use a very cliché song such as ‘I Will Survive’, but I wanted a disco song. I think it was perfect for the title and the movie.

You collaborate with Alberto Iglesias for music. How do you work?

He’s so generous and such a nice guy, and he understands everything that I say. He understands my ignorance. He knows me very well and he always understands the movie from the very beginning. We’d talk a lot during the editing and every movie is different. He tries to offer me different options. He works a lot, more than the usual, but I give him more time than is usual. The musician has a very short time to create the music. You give them the movie when it is finished and then everything is hurried. I took four months to work with it and he likes to work like that. At the beginning, it was very close to what I wanted. Sometimes it looks like you are in a hotel and you are in there playing the piano. He risks a lot for me. I am very happy with his work. For me it was essential to work with Alberto.

Are any of the characters inspired by those you know in real life?

Well, yeah some of them, I won’t say exactly who! But it’s not only people that I know but also countries that I know, even though it isn’t obvious in the movie. It’s a metaphor about the situation In Spain, going round in circles without knowing exactly how you’re going to land, knowing you will have to make an emergency landing, knowing there is an amount of danger involved. It’s very similar to the situation we are living in in Spain at the moment. It’s a comedy so of course things end well, there is uncertainty and fear.

I can’t want to see which airline is brave enough to show that film first. My question is you have had remarkable loyalty from Spain’s top actors over many years and they have really contributed to the quality of your films. What do you out that down to?

I was very lucky. I think I have worked with some of the best Spanish actors. They are really great actors. I’m not sure why I work with such wonderful actors. I think everything depends on how much time you dedicate to them. I dedicate my life, and they tell me it’s very unusual. The directors don’t talk so much to the actors or they rehearse to suit him. For me all the elements in the movie, music, photography, script, are very important elements to narrate ones story. You can tell the story from the bodies and the faces and the hearts and the gut of the actors. So they are very worthy. This is one of the reason I wanted to be a director, just to work with great actors. It’s not only pleasure, it’s almost a miracle when they come to you for the first time, it’s a privilege that only the directors have.

Front Row Reviews would like to thank the Cornerhouse Manchester for arranging this event.