Everybody Has A Plan Review
Home
Reviews

Everybody Has A Plan Review 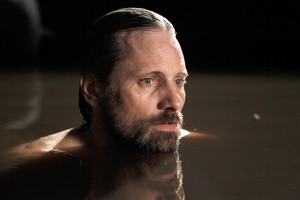 Ana Piterbarg’s debut feature, Everybody Has A Plan, on paper has a really unique and interesting set up; mixing internalised drama with crime thriller but made with the feeling of arthouse realism. Starring Lord of the Rings star Viggo Mortensen, Everybody follows a set of twins (both played by a very sombre and often boring Mortensen) who live very different lives. Agustín is a renowned doctor in the city, with a wife, a beautiful apartment and plans to adopt a baby whilst Pedro is a low life who lives in a remote Argentinian swampland, where the brothers were brought up and is mixed up with criminals from the area.

Although he has everything he could possibly want, Agustín seems to be going through a psychological crisis about where his life is going and he does not see a way out. When he tell his wife, Claudia (a powerful Soledad Villamil) that he no longer wants to adopt a baby, she tells him that their marriage is over and she is going to continue with the plans they had made. Whilst she is away visiting family and giving Agustín time to get his life together, he is visited by Pedro who comes with the news that he has terminal cancer and that he wants help to be put out of his misery. Pedro tells Agustín that there is a good sum of money hidden with his bees, which he keeps back at home, and that he can have when Pedro dies but he neglects to tell his brother about the web of criminality that he is caught up within.

Whilst the first part of the film is slow paced and delicately shot, Agustín’s is much more interesting because the drama seems to be happening in his 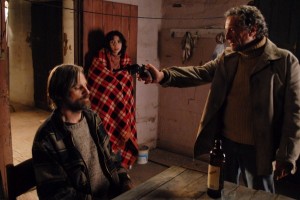 head, where he is quarrelling with himself about where he is in life. There are long shots where Agustín is just looking out and the audience are left to try to understand what is going on in his head. The close ups are hugely interesting in the first part of the film because the audience are growing closer to the character and forced to try and understand him. This seems to be the strength of the film, where Piterbarg is asking the audience to sympathise with her character and allow themselves to be immersed with him. Mortensen does self reflection very well and carefully moves, with emphasis on certain nuances of his character – money isn’t everything. The other side of the story; the criminal side is poorly crafted because there is little motivation for the audience to try and figure out what is happening. There are packages of violence, which seem to come out of nowhere and although they leave consequences for the characters, the audience are in no way forced to care.

When Agustín seizes the right opportunity to kill his brother, he hatches a plan to disappear and take his brother’s life. Although this seems like an interesting twist, Piterbarg does nothing to investigate the outcome of leaving your life for another, except for a beautifully shot scene in prison where Claudia realises what has happened after she discovers Pedro in her bathroom. Instead the story is suddenly more interested in leaving behind any internal contemplation of what has happened and becomes more involved in the crime happening in the Argentinian backwaters. This is why the second half of the film is less powerful because although a slight story of cat and mouse is instigated and Agustín is forced to work out what is going on along with the audience, he never sees any urgency or importance in it and therefore the film loses all integrity in its crime element. As I mentioned earlier, the film has a very certain arthouse style, focusing for long periods of time on certain shots and filmed with a sense of realism, it makes it stand out against the average crime thriller and yet after a while, you feel like you are just watching pretty pictures on screen with a very loose narrative. 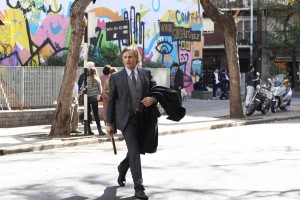 Where the narrative fails to entertain, the atmosphere is dark and chilling, which certainly does hold up part of the entertainment. Piterbarg has created a truly beautiful film but she seems to have taken on too much by trying to pull together too many genres for her feature. She certainly has a skill in filmmaking and that is very clear from the stunning final shot in the lake as boat pulls out towards an unknown future and a delicately filmed sun but in terms of telling a story, it seems she has some way to go.

Many of the decisions taken by Agustín are too out there for his character and for the calibre of the story and therefore it becomes more and more difficult for the audience to understand without any succinct explanation about what is going on. As I have previously suggested, it becomes easy to stop caring about the outcome to any of the characters.

Everybody Has A Plan is interesting, yes, but doesn’t succeed in the genre piece it really tries so hard to become. It’s a well shot film, which is unfortunately let down by poor storytelling and boring, uninventive characters. Even Mortensen doesn’t perform well in the film because his character seems stuck in a permanent state of crisis, which he isn’t able to talk about and therefore work through. The ending is the only ending possible for his character, which is shame because there could have been much more energy in this story.